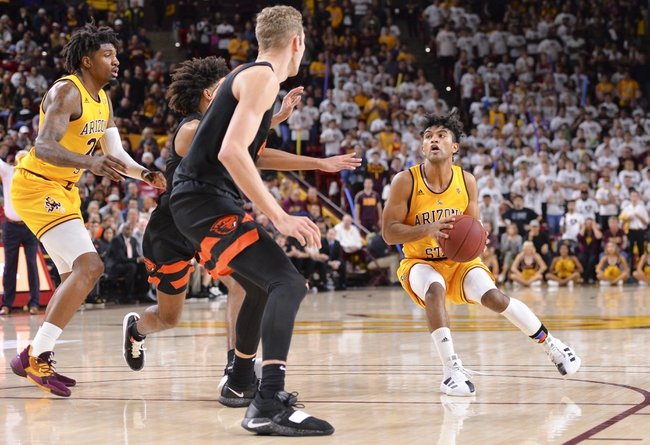 The Rhode Island Rams and the Arizona State Sun Devils meet in college basketball action from the Mohegan Sun Arena on Wednesday night.

The Rhode Island Rams will try to keep their streak going after putting up a sixth straight winning season following a 21-9 overall record in 2019-20, including a 13-5 mark in A-10 conference play to finish in 3rd place, but Rhode Island wouldn’t get the chance to play into the NCAA tournament as the A-10 and all other conference tournaments were cancelled due to the COVID-19 pandemic. The big challenge for this season is replacing 75% of URI’s double-digit scorers from last season, as Jeff Dowtin and double-double machine Cyril Langevine both graduated from the program while Tyrese Martin, who had 12.8 points and 7 rebounds per game, transferred from the Rams to play for UConn. The good news is that Rhode Island does have a centerpiece in the offense in Fatts Russell, who led Rhode Island with 18.8 points and 4.6 assists per game. Russell will also have some complimentary pieces around him as Malik Martin comes in as a transfer from Charlotte after logging 9 points per game for the 49ers last season as well as Jalen Carey from Syracuse and the Mitchell brothers, Mekhi and Makhel, coming over from Maryland. It’s a year full of unknowns as it is in 2020, but outside of Russell, Rhode Island has an extra bi of uncertainty within their ranks and time will tell if the Rams can spin that into another winning season. As a team, Rhode Island averaged 73.3 points per game on 42.3% shooting from the field, 31.5% from behind the arc and 67.6% from the foul line while allowing opposing teams to average 68.9 points on 41.8% shooting from the field and 29.7% from behind the arc last season.

The Arizona State Sun Devils will look to build on a 3rd straight 20-win season under coach Bobby Hurley, putting up a 20-11 record overall last year, including an 11-7 mark in Pac-12 conference play to finish in a tie for 3rd but ending up with the #4 seed in the conference tournament. The Sun Devils were about to take on Washington State in the quarterfinals of the conference tournament, but like previously mentioned, COVID-19 had other plans and all the conference tournaments would be cancelled. The bad news for Sun Devil fans is that Rob Edwards and Romello White are gone from last year’s team after logging 11.6 points and 10.2 points per game respectively with Edwards graduating while White transferring to Ole Miss for his senior year. The good news is that Remy Martin and Alonzo Verge Jr. decided to forgo the NBA draft and return to ASU for one more run after Martin put up 19.1 points per game and garnered early Wooden award nominee and all-Pac 12 first team status while Verge had 14.9 points per game last season. The Sun Devils are also bringing in a pair of top-tier recruits in 5-star Josh Christopher as well as Marcus Bagley with Christopher already earning preseason all-Pac 12 third team status and has been described as a pure scorer, solid ball handler and is able to distribute the ball while having enormous potential to be an outstanding and versatile defender for Arizona State with a high ceiling. Only time will tell if these recruits will pay off for Hurley, but early signs would suggest they should be. As a team, Arizona State averaged 73.8 points per game on 42.9% shooting from the field, 32.3% from behind the arc and 69.5% from the foul line while allowing opposing teams to average 70.5 points per game on 42.8% shooting from the field and 33.1% from the 3-point line last season.

I’m tempted by Rhode Island and free points as the Rams made me a pretty penny the last couple of years. However, there’s a lot of missing pieces from those teams and it’s going to be an adjustment for the Rams. The issue there is that with the turnover, there isn’t much proven talent on the roster outside of Russell and Malik Martin and even then, he was only putting up 9 points per game. The Sun Devils have an all-conference preseason first teamer in Remy Martin, a third teamer in Josh Christopher who hasn’t even played a game, as well as Alonzo Verge Jr. and Marcus Bagley. And we can’t forget about incoming transfers like Holland Woods and Luther Muhammad from Portland State and Ohio State respectively. I think with so much unknown, I have to lean towards Arizona State laying the points here.