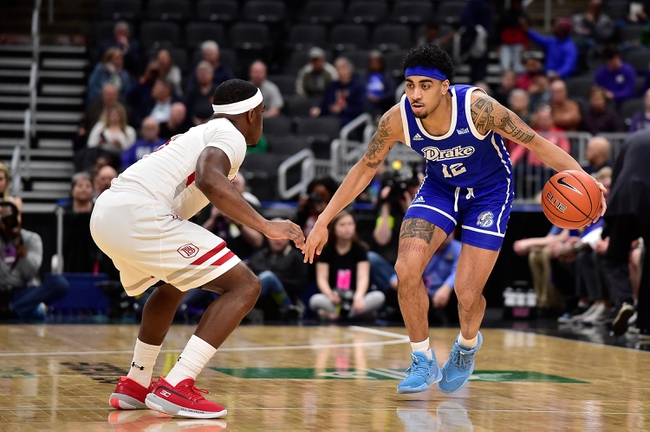 The Drake Bulldogs and the Kansas State Wildcats meet in college basketball action from Bramlage Coliseum on Wednesday afternoon.

The Drake Bulldogs come into the 2020-21 season looking to build on a fairly successful 2019-20 campaign where Drake finished with back-to-back 20-win seasons for the first time since 1969-71 after a 20-14 season including an 8-10 mark in Missouri Valley Conference play. The Bulldogs would receive the 8th-seed in the conference tournament, defeating Illinois State and top-seed Northern Iowa before falling in the tournament semi-finals to eventual champion Bradley. Drake will be moving forward without last year’s leading scorer, rebounder and all-MVC second team forward Liam Robbins, who transferred out of the program to Minnesota and was granted immediate eligibility to play for the Gophers in the upcoming season. Roman Penn is back as Drake’s top returning scorer and assist man after logging 12 points and 5.6 assists per game last season while D.J. Wilkins returns after putting up 8.9 PPG and Garrett Sturtz is also back as the team’s top returning rebounder with 7.4 points and 5.8 rebounds per game last season. As a team, Drake averaged 69.4 points on 45.8% shooting from the field, 34.5% from behind the arc and 71.4% from the foul line while allowing 67.7 points on 42.2% shooting from the field and 36.7% from 3-point range last season.

The Kansas State Wildcats will be eager to bounce back in the upcoming season after the lowest since the turn of the millennium after a disappointing 11-21 record including an abysmal 3-15 mark within Big 12 conference play last season, a massive step back, regressing from a 25-9 season the year prior. Kansas State upended TCU in the first round of the Big 12 conference tournament as the lowest seed at #10, but the remainder of the tournament was cancelled due to the Coronavirus pandemic. The Wildcats will be undergoing a massive rebuild and facelift, with their two double-digit scorers from last year’s team gone as Xavier Sneed graduated and Cartier Diarra transferred to Virginia Tech. Makol Mawien also finished up after his senior year, leading K-State with 5.4 rebounds per game last season. Mike McGuirl is in as the lone senior on this year’s roster, but there’s plenty to build around, including 7-foot forward Davion Bradford and 6’10” transfer Kaosi Ezeagu. Head coach Bruce Weber made sure to specify that all starting positions are up for grabs as is playing time and if we see any of Kansas State’s returning players start on opening night, it’s simply because Weber respects his veteran players, but outside of that, it’s anyone’s guess as to what this team will look like as soon as a couple weeks from tip-off. As a team, Kansas State averaged 64.2 points on 41.4% shooting from the field, 31.3% from behind the 3-point line and 66.1% from the foul line while allowing opponents to average 65 points on 43% shooting from the floor and 33% from downtown last season.

I’d understand Kansas State being favored at home if the Wildcats brought a lot more back to the table from last year, but the fact here is that K-State has a lot of turnover from last year, losing a lot of their best players like Mawien, Diarra and Sneed. Drake was a covering machine last year and isn’t afraid to go toe-to-toe with the big boys and while Kansas State is among the big boys, they’re only there because of conference affiliation this season. This is going to be a long year for Kansas State. I’ll take the Drake Bulldogs and the points in a game Drake could win outright.