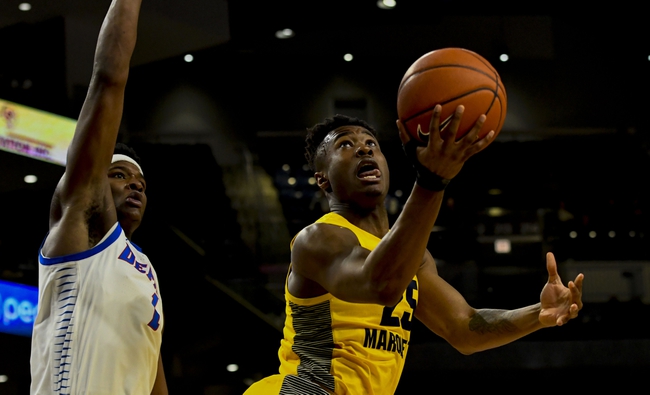 The Arkansas-Pine Bluff Golden Lions and the Marquette Golden Eagles square off in college basketball action from the Fiserv Forum on Wednesday night.

The Arkansas-Pine Bluff Golden Lions will be out to rebound from the worst season for UAPB since 2003-04 after finishing last year with an overall record of 4-26, including a 3-15 mark in conference play to finish in a tie for 9th place in the basement of the SWAC standings, and with only the top-8 teams qualifying for the conference tournament, the Golden Lions were left on the outside looking in after the regular season. The bad news for Pine Bluff is that they lose their leading rebounder in Marquell Carter after Carter graduated last season. The good news for a team that won just four games last season is that they have Shaun Doss and Markedric Bell back as the team’s two double-digit scorers from last year. Doss was limited to just three games due to injury while Bell had 10.8 points per game for the Golden Lions. A lot is needed for the Golden Lions to improve a couple of spots in the standings, but it’s a long road ahead for UAPB going forward to say the least. As a team, Arkansas-Pine Bluff averaged 53.8 points on 39.6% shooting from the field, 26.3% from behind the arc and 58.8% from the foul line while allowing opposing teams to average 68.3 points on 43.2% shooting from the field and 30.9% from behind the arc last season.

The Marquette Golden Eagles will look to build on a 5th straight winning season under Steve Wojciechowski, finishing last year with an 18-12 overall record, including 8-10 in Big East conference play, earning Marquette the #6 seed and a quarterfinal date with Seton Hall. However, the Big East tournament would be cancelled halfway through the first game of the day due to the Coronavirus pandemic and then the NCAA tournament would follow suit shortly thereafter. The big question for Marquette is how will the Golden Eagles replace leading scorer Markus Howard who averaged almost 28 points per game for the Golden Eagles last season. Sacar Anim is also gone as the only other double-digit scorer from last year’s team, but Koby McEwen is back and is suddenly pushed into the leader role after transferring from Utah State prior to last season and will hope to lead Marquette to another solid campaign. Theo John is back to be the muscle inside the paint and Jamal Cain also returns and is likely to see a massive uptick in his usage for this season. D.J. Carton is also transferring in from Ohio State after averaging 10.4 points per game in his lone season with Ohio State. As a team, Marquette averaged 77.8 points on 43% shooting from the field, 38.2% from behind the arc and 74.3% from the foul line while allowing opposing teams to average 71.6 points on 41.2% from the field and 32.2% from 3-point range last season.

Yeesh. Talk about a game to skip if you have the option. However, for the sake of a pick, UAPB was absolutely horrendous last year and couldn’t score if their lives depended on it. Marquette loses some pieces as well, most notably Markus Howard, but there’s still a fair bit of talent in the Golden Eagles’ lineup and I think even with a boatload of points, UAPB holds no value here. Marquette wins in a rout.