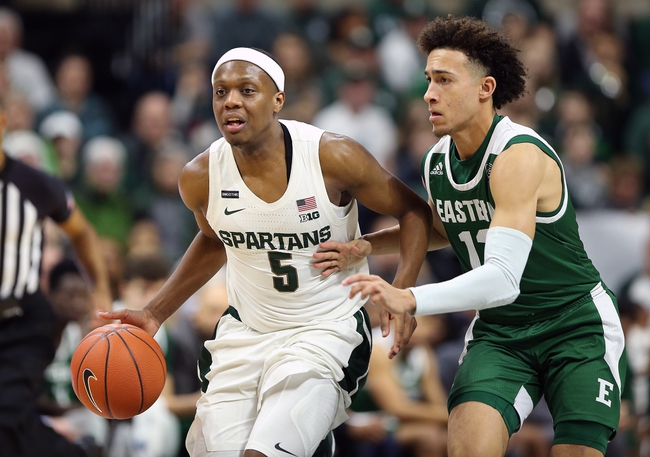 Eastern Michigan is coming off a 16-16 record last season with a 6-12 mark in the Mid-American Conference. That finish left the Eagles in the basement of the West Division standings. As for Michigan State, they went 22-9 last year with a 14-6 Big Ten record. The Spartans finished as Big Ten regular season co-champions. Check back all season long for free college basketball picks at Sports Chat Place.

Eastern Michigan started out on a nice run last season, winning their first six games and eventually going 10-3 in non-conference play. Once the MAC games rolled around however, the Eagles sputtered, losing their first seven conference games in a row and ultimately skidding to a first-round MAC Tournament loss to Kent State 86-76.

This season, Eastern Michigan retains their top scorer from last year in Ty Groce, who averaged 11.5 points, 5.2 rebounds, 2.1 assists and 1.8 steals. Noah Morgan is also back on the roster after 10.0 PPG and 2.8 rebounds per game. The Eagles will be without standout center Boubacar Toure however, after 10.7 PPG and a team-high 9.3 RPG last year.

Over on the Michigan State side, they’re looking for a fourth straight Big Ten regular season championship after a great campaign last year. The Spartans went 22-9 overall and 14-6 in the Big Ten, winning eight straight games at one point. Michigan State finished off with five straight wins (four against ranked teams) before the Big Ten Tournament was cancelled.

PICK: I’m going to stick with Michigan State here, but probably staying away. The Spartans certainly lost a lot of top-end talent over the summer, but a big program like Michigan State always has depth. Aaron Henry, Rocket Watts and Joey Hauser figure to take on key roles for the Spartans this year, and it will be interesting to see how that “big three” gels on the court. It’ll take a few games before we see what the Spartans are like this season, but they’ve got the horses to make another Big Ten run.