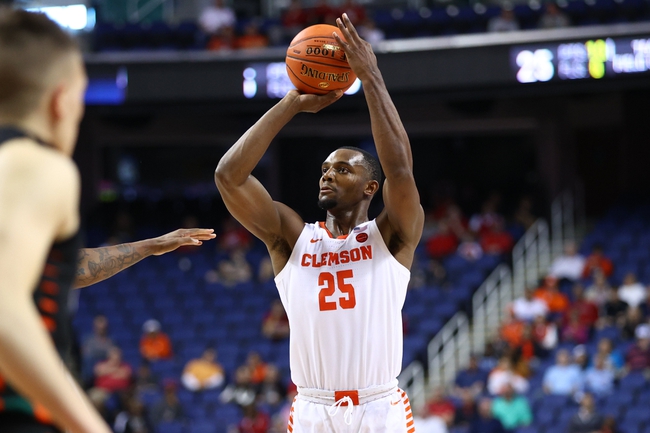 The Clemson Tigers and the Mississippi State Bulldogs meet in college basketball action from Titan Field House on Wednesday night.

The Clemson Tigers will look to bounce back in 2020-21 after taking another step backwards last season, finishing with a record of 16-15 overall including 9-11 in ACC conference play to finish in 9th in the ACC standings. The Tigers were scheduled to play Florida State in the quarterfinals of the ACC conference tournament but the tourney was cancelled due to the Coronavirus pandemic. The Tigers really had issues out of conference, getting out to a 5-1 start but the only notable win was against TCU in overtime in the MGM Resorts Main Event. The Tigers would then lose 4 straight and 6 of their next 7 overall to set the tone for the rest of the season, falling back to .500 at 15-15 in the end of the regular season. The good news for Brad Brownell is that Aamir Simms is back after leading the Tigers with 13 points and 7.2 rebounds per game last season while Nick Honor transfers in as a sophomore from Fordham after putting up 15.3 points per game in 2018-19 with the Rams. John Newman III and Al-Amir Dawes are also back after logging 9.5 and 9 points respectively last season. As a team, Clemson averaged 66.5 points per game on 42.8% shooting from the field, 31.5% from behind the arc and 68.6% from the foul line while allowing opposing teams to average 64.1 points on 41.1% shooting from the field and 32.6% from 3-point range last season.

The Mississippi State Bulldogs will also look to rebound after a step-back year in 2019-20, finishing the year with a 20-11 overall record and an 11-7 mark in SEC conference play, earning the #4 seed in the conference tournament, earning a bye to the quarterfinals, but like previously mentioned, COVID-19 had other plans and the conference tournament would be cancelled. The issue for head coach Ben Howland coming into this season is that his four best players in Reggie Perry, Tyson Carter, Robert Woodard and Nick Weatherspoon are all gone, leaving Howland to basically start from scratch. The good news though, is that Mississippi State brings in Jalen Johnson, a transfer from Louisiana after averaging 15.5 points and 6.6 rebounds for the Ragin’ Cajuns last season. Abdul Ado is also back for the Bulldogs after recording 5.7 points and 6.7 rebounds per game and D.J. Stewart is also back after putting up 8.5 points per game last season. As a team, Mississippi State averaged 73.4 points per game on 46.8% shooting from the field, 33.6% from behind the arc and 75.4% from the foul line while allowing opposing teams to average 68.1 points on 42.4% shooting from the field and 31.2% from 3-point range last season.

I’d be more apt to looking the Bulldogs’ way in Mississippi, but on a neutral floor, I like the fact that Clemson has key players returning which isn’t necessarily something we can say for the Bulldogs. This is a tough game to call and the line feels about right, but I’ll lay the points with Clemson as I think the Tigers win this game by 5-6 points. Give me Clemson.