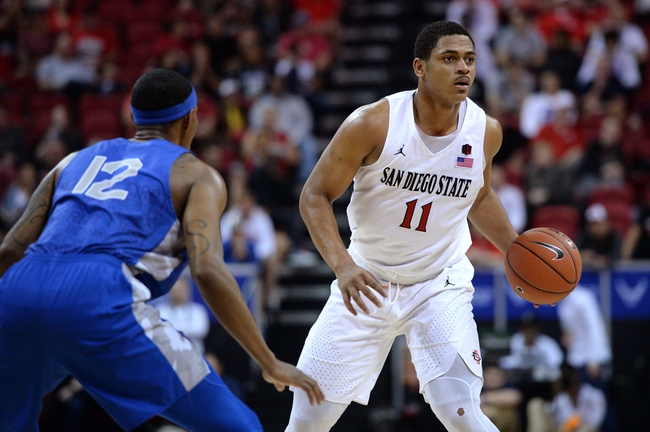 The UCLA Bruins and the San Diego State Aztecs meet in college basketball action from the Viejas Arena on Wednesday night.

The UCLA Bruins will try to rebound from a down year by their standards, finishing with a 19-12 record in Mick Cronin’s first year in charge as head coach, including a Pac-12 conference record of 12-6, good enough to get the #2 seed in the conference tournament. UCLA wouldn’t get their chance to win the tournament though as the Pac-12 tournament and subsequently the NCAA tournament were cancelled on the same day back in March, ending the season as it stood. UCLA brings back almost its entire team from last year, only losing Prince Ali as a graduating senior. Chris Smith is back as UCLA’s lone double-digit scorer with 13.1 points per game and 5.4 rebounds per game while Jalen Hill returns after putting up 9 points and a team-high 6.9 rebounds and Tyger Campbell is expected to run the point again after recording 8.3 points and a team-high 5 assists per game last season. As a team, UCLA averaged 69.5 points per game on 43.4% shooting from the field, 32.3% from behind the 3-point line and 73.7% from the foul line while allowing opposing teams to average 67.1 points per game on 42.9% shooting from the field and 37.5% from 3-point range last season.

The San Diego State Aztecs will try to build on arguably the best season in program history, finishing the year with a 30-2 overall record, including a 17-1 record in Mountain West conference play to win the regular season Mountain West title and the top seed in the conference tournament, but like previously mentioned, COVID-19 had other ideas and the season would fold, not letting San Diego State to play out their tournament and potentially lift the national championship trophy. The Aztecs lost leading scorer and assist man Malachi Flynn to the NBA while Yanni Wetzell and KJ Feagin each finished up their time with the program. The good news for Brian Dutcher and the Aztecs is that Matt Mitchell is back after putting up 12.2 points and 4.8 rebounds per game again and he has some reinforcements coming in as Terrell Gomez comes over from CSU-Northridge after leading the Matadors with 19.8 points per game and Jordan Schakel is also back after logging 10 points per game for San Diego State last season. As a team, San Diego State averaged 74.8 points on 46.8% shooting from the field, 38% from behind the 3-point line and 77.1% from the foul line while allowing opposing teams to average 59.5 points per game, the 3rd-fewest in the country, on 38.7% shooting from the field and 29.7% from 3-point range last season.

I know that UCLA finished strong last year and bring back almost their whole starting 5 from last year, but even if San Diego State is without Malachi Flynn, this is still a really good Aztec team that reloaded with Terrell Gomez coming over from CSU-Northridge and the Aztecs are always going to be a tough nut to crack defensively. UCLA and Mick Cronin just don’t seem like a good fit to me for some reason as this young UCLA team wants to run and gun and Cronin’s more of a defensive coach that likes physicality and I’m just not seeing the connection. I think the Aztecs can and do win this game outright, so I’ll back San Diego State and the points here.