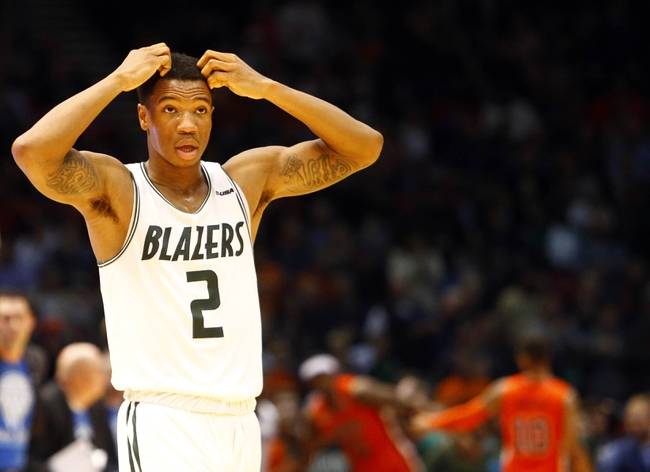 Alcorn State went 15-15 overall last season, carrying a 11-7 record in Southwestern Athletic Conference play. That result left the Braves in a three-way tie for fourth place in the conference standings. As for UAB, they finished 19-13 overall last season with a 9-9 Conference USA record. The Blazers finished seventh in the CUSA standings at year’s end. Check back all season long for free college basketball picks at Sports Chat Place.

Alcorn State opened up with some tough teams on the schedule last season and stumbled out of the gate. By the time conference play rolled around, the Braves were just 4-7. Alcorn State jumped out to a 6-2 mark in SWAC games initially, but went just 5-5 down the stretch. The Braves finished with a SWAC Tournament loss to Jackson State 69-52.

This season, Alcorn State will have some production to replace with the departure of Maurice Howard, who led the team with 13.9 points per game and 3.8 assists per game last year. The good news for the Braves is that Troymain Crosby returns for his senior year following per-game averages of 13.8 points, 5.4 rebounds and 1.9 assists.

Over on the UAB side, they had some tough teams on their non-conference schedule last year as well, but got through the gauntlet pretty well at 9-4 after losses to Utah Valley, Kentucky, Texas and Memphis. Conference USA play was hit and miss for the Blazers in what was ultimately a 9-9 run, but UAB was able to take out UTSA 74-69 in the only conference tournament game they played.

PICK: I’m going with UAB. We probably won’t get a good feel for how Alcorn State will operate this season until a few games in, as they’ll be featuring a lot of new faces in key roles. The Blazers, conversely, will return three of their four top scorers from last season to the roster, and the team should have a good bit of chemistry right out of the gate. Whatever the case, it should be a nice matchup that will tell us a lot about both teams.