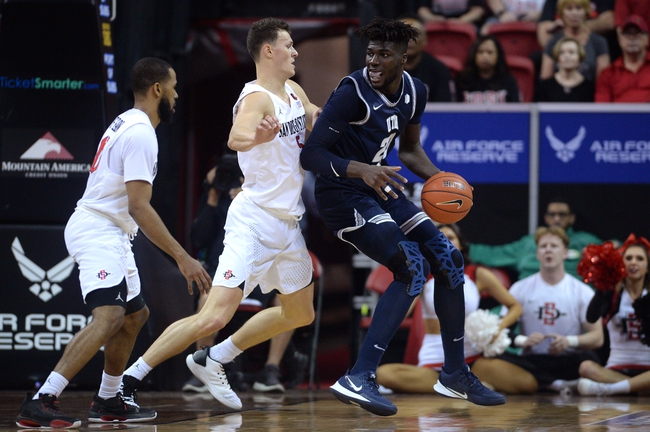 The Utah State Aggies and VCU Rams face off on Wednesday in a college basketball showdown at the Sanford Pentagon in Sioux Falls.

The VCU Rams looked like they had an easy path to the NCAA tournament last season before a late collapse kept them out of it. The good news heading into this season is they have the top recruiting class in the A-10 coming into season. This is a very young VCU team that is going to lean on those young guys early, which could mean there are some struggles, but in the long run it’s really going to help the team. Nah’shon Hyland is the best player back from last year’s squad averaging nine points per game. The expectation is that Hyland will be a leader on this young team, and down the stretch of the games, that is probably the direction they will turn. In terms of the freshman, the best player looks to be Adrian Baldwin who is coming out of prep school.

Utah State had a strong 2019 season finishing with a 26-8 record and in conference play, they finished with a 12-6 record. The problem heading into this season for Utah State is they are super inexperienced returning only four upperclassmen who played roles on last year’s team. The good news for the Aggies is they do get back Neemias Queta who very well could end up the conference player of the year. Last season, Queta averaged 13 points, 7.8 rebounds, and 1.7 blocks per game. There has been a lot of chatter about how Queta has improved this offseason. Young guys who had reserve roles last year like Sean Bairstow and Kuba Karwoski are going to need to take a step forward.

VCU is 1-7 against the spread in their last eight games overall. VCU is 6-23 in their last 29 games played on Wednesday. The under is 7-3-2 in Utah State’s last 12 games as a favorite.

These are two teams who don’t have a lot of experience, but Utah State has Queta and that is going to be the difference in this game. VCU is going to have no answer for them, and that will lead to Utah State winning this game.