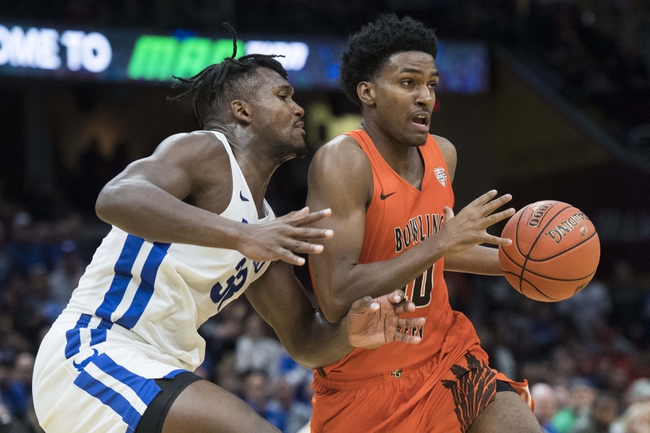 Wright State enters this one at 1-1 so far. After falling to Marshall in their opener, the Raiders took out Miami-OH last weekend. As for Bowling Green, they’re 4-1 this year. The Falcons have won four straight games, most recently beating Buffalo last Sunday. Check back all season long for free college basketball picks at Sports Chat Place.

Wright State had a 34-29 leaden Marshall at halftime in their opener, but coughed up 51 points in the second on the way to an 80-64 loss. Leading the way for the Raiders in that one was Trey Calvin with 16 points, two assists and one rebound. Loudon Love notched a double-double as well on 16 rebounds, 11 points and two assists.

The second game against Miami-OH went much better in a 71-47 Wright State victory. Calvin was again the Raiders’ top scorer there, notching 16 poitns, five rebounds and three assists. Tim Finke doubled up on 13 points, 11 rebounds and six assists, while Grant Basile notched 14 points with six rebounds.

Over on the Bowling Green side, they lost their opener 96-82 versus Michigan, but since then it’s been smooth sailing. The Falcons took out SC State 101-78, then eked one out versus APP State 78-76. After dispatching Purdue Calumet 88-67, Bowling Green got another win last weekend 86-78 over Buffalo.

In the win over the Bulls, Bowling Green’s Justin Turner led the scoring with 33 points, four rebounds and three assists, while Daeqwon Plowden pulled down 10 boards with eight points. Kaden Matheny added 11 points, and Trey Diggs posted 10 with four rebounds in the victory.

PICK: I’m going to stick with Bowling Green here. The Falcons have been pretty darn good at scoring so far this year, notching 78 or more points in every outing and getting several different players involved. Wright State only has a couple of appearances under their belt, but over their first pair they’ve done a pretty good job at spreading the ball around. Still, I think Bowling Green is on a nice run and will continue that with a cover in this one.