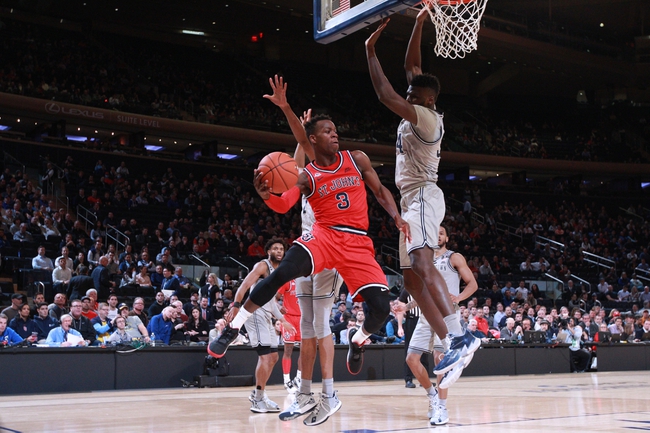 The St. John’s Red Storm and the Georgetown Hoyas meet in Big East conference college basketball action from the Capital One Arena on Sunday night.

The St. John’s Red Storm will look to build on their 5-2 record this season despite a 77-68 setback against Seton Hall in their last matchup. Justin Champagnie led the Red Storm with 24 points on 10 of 19 shooting with 6 rebounds and 3 blocks while Greg Williams Jr. added 12 points on 4 of 10 shooting and Vince Cole chipped in 11 points on 5 of 11 shooting. Rasheem Dunn added 10 points on 5 of 10 shooting with 3 steals to cap off the scoring in double figures for St. John’s in the win while Dylan Addae-Wusu added a team-high 6 assists. Champagnie leads the Red Storm in scoring and rebounding with an average of 22.4 points and 6.8 rebounds per game while Posh Alexander is the Terps top assist man, averaging 4.3 assists per game this season. As a team, St. John’s is averaging 80.3 points on 46.7% shooting from the field, 29.8% from behind the arc and 74.3% from the foul line while giving up 75.6 points on 47.6% shooting from the field and 36.2% from 3-point range this season.

The Georgetown Hoyas will look to bounce back after a 76-63 loss to Villanova in their last matchup. Jamorko Pickett led the Hoyas with 16 points on 7 of 11 shooting with a pair of threes and 10 rebounds for the double-double while Qudus Wahab added 12 points on 5 of 12 shooting and Jahvon Blair added 11 points with a team-high 3 assists to cap off the trio of double-digit scorers for Georgetown in the losing effort. Blair leads Georgetown in scoring with an average of 18.4 points per game while Pickett leads Georgetown in rebounding by averaging a double-double per game with 14.6 points and a team-high 10 rebounds per game and Jalen Harris has a team-high 5.2 assists per game for Georgetown this season. As a team, Georgetown is averaging 71 points on 42.8% shooting from the field, 33.6% from behind the arc and 65.7% from the foul line while allowing opposing teams to average 68.8 points on 38.9% shooting from the field and 30.6% from 3-point range this season.

I get Georgetown being favored at home, but the Hoyas haven’t been a very good team both in the Big East and in the country for some time now and it’s almost at a point where you wonder where the fall-off is going to be for Georgetown because you know it’s coming. I tnink we might see multiple drop-offs from Georgetown as I think one’s already happened and I wouldn’t be surprised if another one happened here. I’ll take St. John’s and the free point on the road as I just think the Red Storm are the better team with Champagnie in the frontcourt.