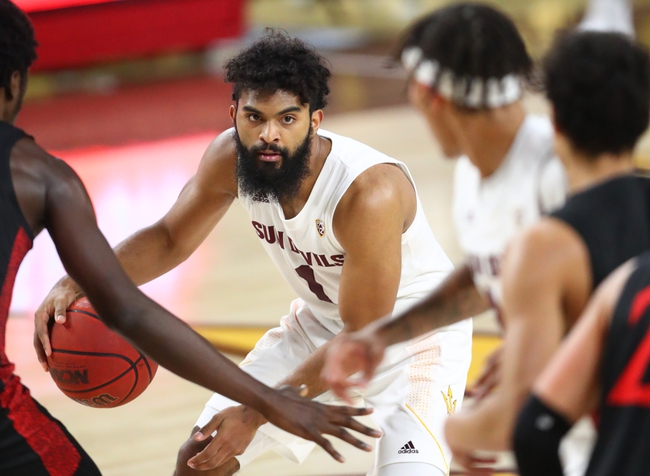 The Arizona State Sun Devils look to bounce back after falling to 3-2 on the year with an 80-68 loss to San Diego State at home in their last outing. Alonzo Verge Jr. led the Sun Devils with 25 points on 8 of 20 shooting with 7 threes and a team-high 4 assists while Josh Christopher added 13 points with 5 rebounds and Jalen Graham chipped in 10 points with a pair of blocks to round out the trio of double-digit scorers for ASU in the losing effort. Remy Martin also chipped in 9 points with 5 rebounds and 3 assists in the defeat for ASU. Verge Jr. leads Arizona State in scoring with an average of 18.3 points per game while Martin leads the Sun Devils in assists with 3.8 assists per game and Marcus Bagley leads the Sun Devils on the glass with 5.8 rebounds per game this season. As a team, Arizona State is averaging 81.2 points on 45.5% shooting from the field, 36.2% from behind the arc and 65% from the foul line while allowing opposing teams to average 78 points on 44.7% shooting from the field and 36.1% from behind the arc this season.

The Grand Canyon Antelopes will look to add to their 4-0 start to the year after an 87-77 win over Nevada last time out. Jovan Blacksher Jr. led the Antelopes with 22 points on 7 of 14 shooting with 3 threes and a team-high 4 assists while Alessandro Lever added 19 points with a pair of steals. Oscar Freyer added 12 points on 5 of 7 shooting with a pair of threes and a team-high 9 rebounds while Mikey Dixon chipped in 11 points with 5 rebounds to round out the group of double-digit scorers for Grand Canyon in the victory. Lever leads Grand Canyon in scoring with 17.3 poitns per game while Blacksher Jr. leads the Antelopes in assists with 5 assists per game and Asbjorn Midtgaard leads the Anyelopes in rebounding with 9.5 rebounds per game this season. As a team, Grand Canyon is averaging 84.5 points on 53% shooting from the field, 32.9% from behind the arc and 62.8% from the foul line while allowing opposing teams to average 60.5 points on 38.4% shooting from the field and 30.4% from 3-point range this season.

I get how talented the Sun Devils are and Arizona State was and still kind of is a team that I’m high on over the course of the season heading into March. However, Grand Canyon continues to get little respect from oddsmakers just because they’re one of the new kids on the block in division I. You could criticize Grand Canyon for the cupcake schedule in their first three games, but a double-digit win over Nevada is something to hang your hat on. I don’t think Grand Canyon’s a novelty act and I think a strong showing here would go a long way toward telling that to the rest of the country. I’ll take a shot with Grand Canyon and the points in this one.