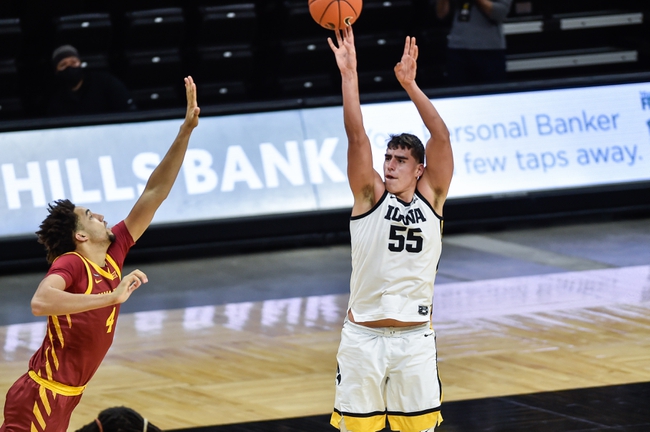 The Northern Illinois Huskies and the Iowa Hawkeyes meet in college basketball action from Carver-Hawkeye Arena on Sunday afternoon.

The Northern Illinois Huskies will look for a massive road win to get their first W of the season after falling to 0-4 with a 79-70 overtime loss to Ball State last time out. Trendon Hankerson and Darius Beane each had 18 points as the lone pair of double-digit scorers for the Huskies in the losing effort with both logging 5 rebounds and Hankerson drilling 4 threes for the Huskies along with 3 assists as well. Kaleb Thornton added 9 points with a team-high 6 rebounds and 3 assists as well for NIU in the defeat. Tyler Cochran leads the Huskies with an average of 14 points per game while Anthony Crump leads the Huskies with 5.3 rebounds per game and Thornton leads the Huskies in assists with 3.5 helpers per game this season. As a team, Northern Illinois is averaging 60.8 points on 40.1% shooting from the field, 27.9% from behind the arc and 67.6% from the foul line while allowing opposing teams to average 76.5 points on 45.3% shooting from the field and 39.1% from 3-point range this season.

The Iowa Hawkeyes will look to remain unbeaten, sitting at 5-0 on the year after a 105-77 thumping of Iowa State last time out. Luka Garza led the way with 34 points on an astounding 13 of 14 shooting, including 6 of 7 from 3-point range in just 17 minutes on the floor while Jack Nunge added 17 points on 7 of 9 shooting with 10 rebounds for the double-double and Joe Wieskamp added 16 points to cap off the trio of double-digit scorers for Iowa in the victory. Jordan Bohannon added 5 assists while Joe Toussaint dished out a team-high 7 assists as well for the Hawkeyes in the victory. Garza leads Iowa in scoring and rebounding with an average of 30.4 points and 9.2 rebounds per game while Bohannon leads the Hawkeyes in assists with 4 assists per game this season. As a team, Iowa is averaging 99.4 points per game on 49.9% shooting from the field, 39.7% from behind the arc and 75.6% from the foul line while allowing opposing teams to average 71.6 points on 39.9% shooting from the field and 32.2% from 3-point range this season.

The boatload of points is tempting because this kind of number is basically begging for a backdoor cover if Iowa takes their foot off of the gas late. The problem is that Iowa’s that good that even the backups could probably ring up Northern Illinois by 30+. The Hawkeyes have beaten better than NIU in convincing fashion this year, so I’m not going to stray from that and expect anything different. I’ll lay the points with Iowa here.