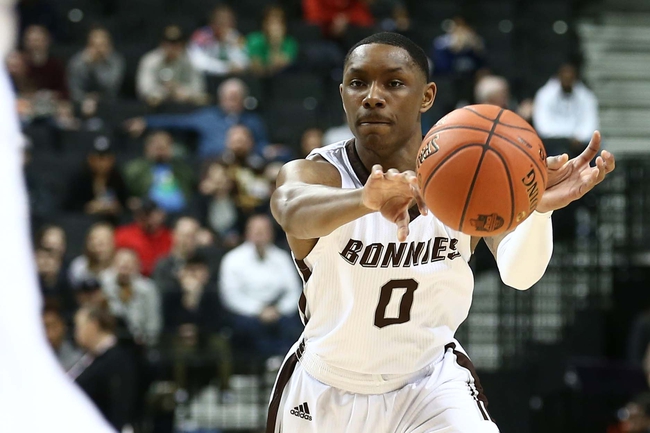 The St. Bonaventure Bonnies and the Akron Zips meet in college basketball action from Rocket Mortgage Fieldhouse on Tuesday afternoon.

The St. Bonaventure Bonnies take the floor for the first time this season after a 2019-20 season that saw the Bonnies go 19-12 overall, including an 11-7 mark in A-10 conference play to finish tied for 5th. The Bonnies wouldn’t get a chance to make noise in the conference tournament as it was cancelled due to the COVID-19 pandemic. There’s a lot to like about this year’s Bonnies, as many of them were Bonnies last year as well with St. Bonaventure returning all four double-digit scorers from last year’s team. Kyle Lofton’s back after leading the Bonnies with 14.1 points and 6 assists per game while Osun Osunniyi also comes back after putting up 10.8 points and a team-high 8.4 rebounds per game. Dominick Welch had 11.8 points with 6.9 rebounds and Jaren English also added 11.9 PPG for the Bonnies last year making this one of the more dangerous teams in the A-10 based on continuity alone. As a team, St. Bonaventure averaged 69.1 points on 43.6% shooting from the field, 34.4% from 3-point range and 73.6% from the foul line while allowing opposing teams to average 66.9 points on 41.7% shooting from the field and 32.9% from 3-point range last season.

The Akron Zips will look to build on their season-opening 97-48 win over Cedarville last time out. Loren Cristian Jackson led the Zips with 19 points on 7 of 11 shooting with 3 threes and a team-high 9 assists while Ali Ali and Jermaine Marshall each had 12 points with Ali shooting 5 of 11 from the floor while Marshall was perfect from the floor, going 4 of 4 with a pair of threes and a pair of free throws. Mikal Dawson added 11 points with 3 threes to round out the group of double-digit scorers for Akron in the win. Camron Reece added 6 points with a team-high 8 rebounds as well in the winning effort for the Zips. As a team, Akron is averaging 97 points on 53% shooting from the field, 40% from 3-point range and 73.3% from behind the arc while allowing 49 points on 38.6% shooting from the field and 21.1% from 3-point range this season.

Akron’s had the advantage of having a game under their belts to get off some of the rust, so the points are somewhat tempting. However, the Bonnies are my early pick to win the A-10 just based on how much returning production they have from last year’s team and it’s not like it’s just a couple of returning rotation players. These are starters and double-digit scorers that are back for the Bonnies. I’ll lay the points with St. Bonaventure in this one.