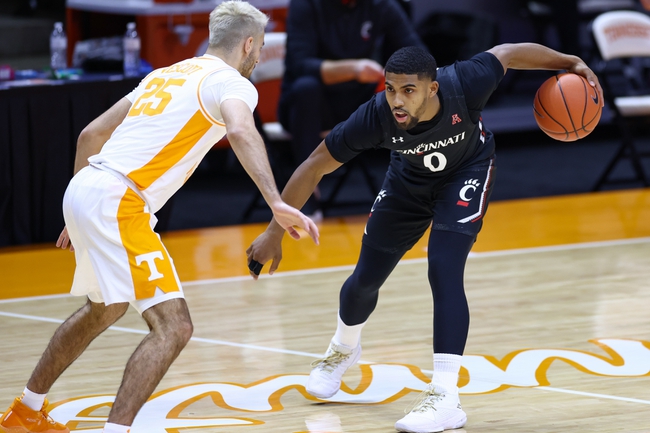 The USF Bulls and the Cincinnati Bearcats meet in AAC college basketball action from Fifth Third Arena on Wednesday night.

The USF Bulls will look to build on back-to-back wins after a 58-56 win over Wofford last time out. David Collins led the Bulls with 13 points on 6 of 14 shooting with 11 rebounds for the double-double while Alexis Yetna added 11 points with a pair of blocks as the only other double-digit scorer for USF in the winning effort. Jamir Chaplin added 8 points with 8 rebounds while Justin Brown added 9 points as well in the victory. Collins leads USF in scoring and assists with an average of 13.3 points and 3.7 assists per game while Yetna leads the Bulls in rebounding with 6.3 rebounds per game this season. As a team, USF is averaging 71.2 points on 45% shooting from the field, 35% from 3-point range and 59.8% from the free throw line while allowing 69.8 points on 43.1% shooting from the field and 27.6% shooting from the field this season.

The Cincinnati Bearcats will look to find some consistency after alternating wins and losses in each of their first four games of the year following a 65-56 loss to Tennessee last time out. Jeremiah Davenport led the Bearcats with 14 points on 5 of 8 shooting with 4 threes while David DeJulius added 11 points along with a team-high 7 assists and 3 steals as the only other double-digit scorer for Cincinnati in the losing effort. Tari Eason added 7 points to match his team-high 7 rebounds and Rapolas Ivanauskas added 6 rebounds as well in the loss for the Bearcats. Keith Williams still leads Cincinnati in scoring with an average of 14.5 points per game while DeJulius leads the Bearcats in rebounding and assists with 5.5 assists per game this season. As a team, Cincinnati is averaging 67.5 points on 44.6% shooting from the field, 25% from 3-point range and 64.1% from the foul line while allowing opposing teams to average 67.5 points on 41.1% shooting from the field and 28.4% from 3-point range this season.

I will give credit for USF beating Wofford as that was a hard-fought win that will be big for USF’s confidence going forward, but I’m just not sure how well it’ll carry over against Cincinnati as the Bearcats are still solid defensively even in what feels like a down year. On the other hand, I still have questions about Cincinnati and but in the past, USF has been a team that you ca answer those kinds of questions against. I think we see another kind of grind it out, physical style of game here, so I’ll side with the under as my free pick for this game but my stronger play is on the side and I have that available as a premium play that you can find here.