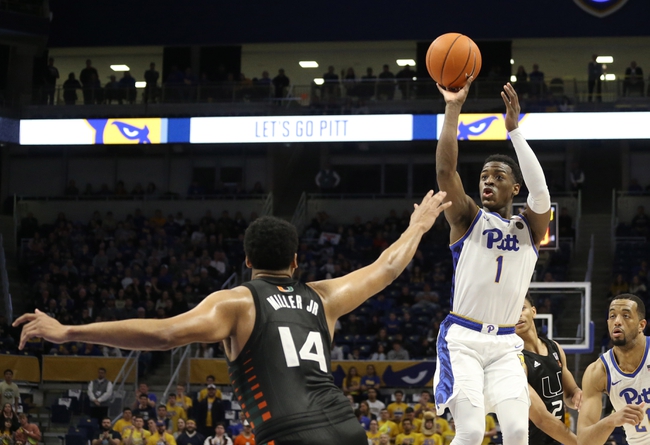 The Pitt Panthers and the Miami-Florida Hurricanes meet in ACC college basketball action from the Watsco Center on Wednesday evening.

The Pitt Panthers will look to add to their current four=game winning streak after a 67-50 win over Gardner-Webb last time out. Justin Champagnie led the Panthers with 24 points on 10 of 20 shooting with a game-high 21 rebounds and 5 assists with a pair of blocks while Xavier Johnson added 12 points on 4 of 5 shooting with 4 assists as the only other Panther to score in double figures in the winning effort. Abdoul-Karim-Coulibaly added 6 points with a team-high 9 rebounds as well in the victory. Champagnie is averaging a double-double per game to lead Pitt in scoring and rebounding with an average of 19.4 points and 13 rebounds per game while Johnson leads the Panthers in assists with 6.6 assists per game this season. As a team, Pitt is averaging 76 points on 43.5% shooting from the field, 30.1% from behind the arc and 62.7% from the foul line while allowing opposing teams to average will look to will this season.

The Miami-Florida Hurricanes will look to bounce back from their first loss of the season after a 66-62 loss to Florida Gulf Coast last time out to fall to 3-1. Isaiah Wong led the ‘Canes with 20 points on 9 of 19 shooting with 3 steals while Nysier Brooks added 13 points along with 15 rebounds for the double-double. Anthony Walker added 12 points with 3 blocks to cap off the trio of double-digit scorers for Miami in the losing effort. Wong leads the Hurricanes in scoring with an average of 17 points per game while Chris Lykes leads the Hurricanes in assists with 5.5 assists per game and Harlond Beverly leads the ‘Canes in rebounding with 8.3 rebounds per game this season. As a team, Miami is averaging 69.8 points per game on 44.5% shooting from the field, 22.7% from 3-point range and 69.9% from the foul line while allowing 59.8 points on 35.5% shooting from the field and 31.7% from 3-point range this season.

I get Miami being favored at home, but I didn’t like how the ‘Canes looked against Florida Gulf Coast and I just don’t know if Miami has anyone that can cancel out Justin Champagnie in the paint. Pitt also looked good in their lone road game so far and I just think this game is closer to a pick ‘em so I’ll take the free bucket with Pitt in this one.