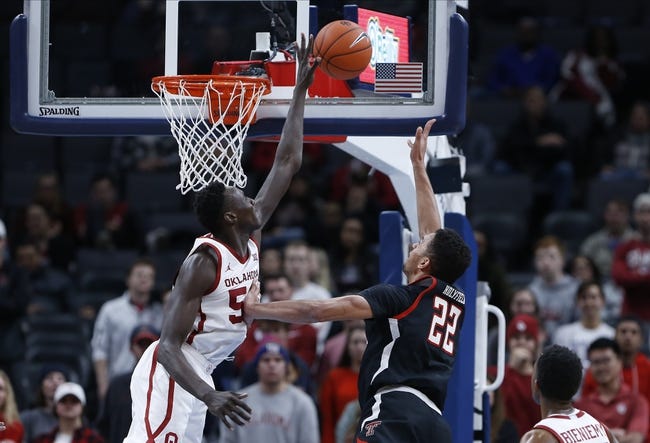 Texas Tech is sitting at 6-2 so far this season. The Raiders had a four-game winning streak snapped by Kansas in their last outing. As for Oklahoma, they’re 5-1 this year. The Sooners are riding a three-game win streak of their own with victories over Florida A&M, Oral Roberts and Houston Baptist. Check back all season long for free college basketball picks at Sports Chat Place.

Texas Tech has played pretty well in the early-going this season, with just two losses against great teams. The Raiders opened at 2-0 before losing 64-53 to Houston. Wins 80-46 over Troy, 81-40 over Grambling State, 51-44 over Abilene Christian and 77-57 over Texas A&M-CC followed.

On Thursday against Kansas, Texas Tech took their second loss of the year in a difficult 58-57 result. Leading the way for the Raiders was Mac McClung with 21 points, one assist and two rebounds. The only other Texas Tech player in double-figures there was Terrence Shannon on 20 points and nine boards.

Over on the Oklahoma side, they kicked off the year with wins over UTSA and TCU before falling 99-77 to Xavier. Since then it’s been three straight wins for the Sooners. Those have come 85-54 over Florida A&M, 79-65 over Oral Roberts and 84-65 over Houston Baptist.

In the win over the Huskies, Oklahoma’s Austin Reaves led the team in scoring with 15 points, five assists and four rebounds. Brady Manek chipped in 13 points and two boards, while Victor Iwuakor notched 12 points and three rebounds in 19 minutes on the court.

PICK: I’m going to take a shot on Oklahoma here. Texas Tech was overwhelmed against a good Kansas team in their last outing, shooting just 32.3 percent from the field and getting topped in rebounds 40-35 and assists 13-8. It was an uncharacteristic performance for the Raiders, but it’s worth noting they’ve scored 57 or fewer points in two of their last three games. Oklahoma has looked pretty good offensively this season, and I think they’ve got the horses to keep up and cover in this one.