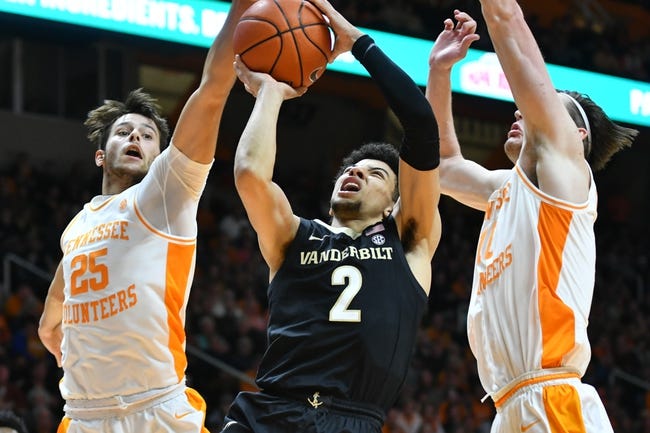 The Tennessee Volunteers and the Vanderbilt Commodores meet in SEC college basketball action from the Vanderbilt Memorial Gymnasium on Tuesday night.

The Tennessee Volunteers will look to add to their 9-1 mark this season after picking up a 68-54 win over Texas A&M in their last outing. Vic Bailey Jr. leads the Vols in scoring with 12.4 PPG while John Fulkerson is 2nd in scoring and tops in rebounding with 11.6 PPG and 6.2 RPG and Santiago Vescovi has 10.3 PPG with a team-high 3.6 APG this season. Jaden Springer is averaging 10 PPG to round out the group of double-digit scorers for Tennessee up to this point in the season while Josiah Jordan-James has 6.1 RPG this season. As a team, Tennessee is averaging 76.8 PPG on 46.5% shooting from the field, 34.9% from 3-point range and 74.6% from the foul line while allowing opposing teams to average 56.8 PPG on 38.4% shooting from the field and 31.2% from 3-point range this season.

The Vanderbilt Commodores will try to rebound from back-to-back three-point losses following an 84-81 loss to Mississippi State last time out. Scotty Pippen Jr. leads the Commodores in scoring and assists with 21.6 PPG and 5.6 APG while Dylan Disu is 2nd in scoring and tops in rebounding with 12.7 PPG and 8.8 RPG this season, making up the lone pair of double-digit scorers for Vanderbilt heading into Tuesday’s rivalry game against Tennessee. As a team, Vanderbilt is averaging 74 PPG on 42.9% shooting from the field, 35.3% from behind the 3-point line and 75.8% from the foul line while allowing opposing teams to average 70.7 PPG on 45.5% shooting from the field and 32.4% from behind the 3-point line this season.

The points with Vanderbilt at home are tempting as their last two games have each been decided by 3 points. However, the Commodores have still had issues with hanging around with the better teams that they’ve played, like losing to Richmond by 11 and Florida by 19 both as 7-point underdogs. Tennessee just sucks the life out of teams with that defense and I expect nothing different here against Vanderbilt, even in an in-state rivalry game. I’ll lay the points with Tennessee in this one.