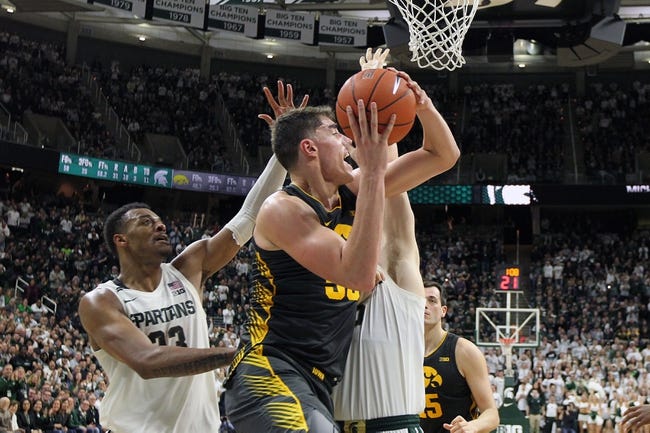 Michigan State comes into this one at 8-4 so far. The Spartans are coming off a tough one-point loss to Purdue in their last game. As for Iowa, they’re 11-2. The Hawkeyes have won four straight games, most recently taking out Minnesota on Sunday. Check back all season long for free college basketball picks at Sports Chat Place.

Michigan State opened up their year on a six-game win streak, taking out Eastern Michigan, Notre Dame, Duke, Detroit, Western Michigan and Oakland. Since then it’s been a 2-4 run with wins over Rutgers and Nebraska mixed in with losses to Northwestern, Wisconsin, MInnesota and Purdue.

In the 55-54 loss to the Boilermakers on Friday, Michigan State’s top scorer was Aaron Henry with 13 points, seven rebounds and two assists. Joshua Langford was the only other Spartans player in double-figures in that one with 10 points and four rebounds in 28 minutes on the floor.

In the 86-71 win over the Gophers on Sunday, Iowa’s Luka Garza led the way on 33 points, five rebounds and three assists. Joe Wieskamp posted 20 points with six rebounds and two assists, and Jordan Bohannon doubled up on 19 points, 14 assists and seven rebounds.

PICK: I’m going to stick with Iowa. This should be a very interesting matchup, though. Michigan State struggled with a pesky Purdue team in their last game, shooting just 39.0 percent from the field and getting out-rebounded 16-7 on the offensive glass. It was uncharacteristic for the Spartans, who have now been at 68 points or fewer in three of their last four games. Iowa is on a nice offensive clip this season and should have the advantage on paper, at least. I like this game to stay close initially, with the Hawkeyes pulling away in the second half.