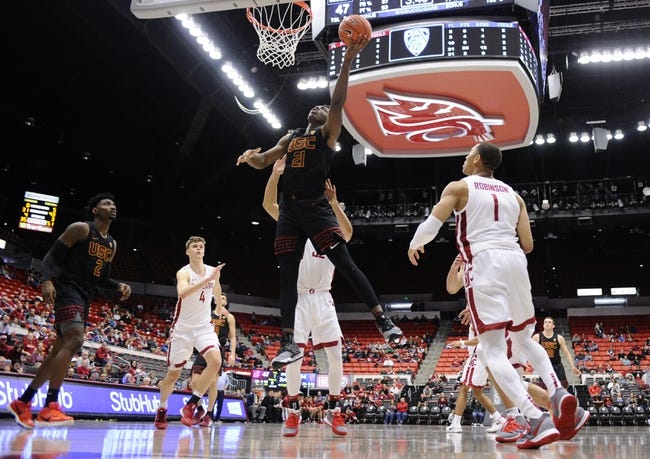 Washington State enters this game at 9-3 so far. The Cougars have lost consecutive games to Stanford and UCLA. As for USC, they’re sitting at 10-2 this year. The Trojans have won five straight games and are coming off a victory over Washington. Check back all season long for free college basketball picks at Sports Chat Place.

Washington State came out of the gate strong this year, ripping off eight straight wins (though some were very tight). After a loss to Arizona and a win over California, the Cougars have lost consecutive games to Stanford 75-60 and UCLA 91-61 in their last pair of outings.

In the loss to the Bruins on Thursday, Washington State’s leading scorer was Isaac Bonton, the only team player in double-figures with 23 points, three rebounds and three assists. Noah Williams chipped in nine points in 21 minutes, and TJ Bamba pulled down five boards.

Over on the USC side, they started out at 3-0 before a loss to Connecticut in game four. After that it was two more wins and a loss to Colorado. In their last five outings, the Trojans have notched wins over Utah, Arizona, Arizona State, UC Riverside and Washington.

In the win over the Huskies 95-68 on Thursday, USC’s Isaiah Mobley posted 18 points with four assists and three rebounds. Evan Mobley added 17 points with six boards and three assists, and Drew Peterson put up 14 points, seven rebounds and two assists for the Trojans.

PICK: I’m sticking with USC in this one. The Trojans posted a nice outing in their last game over an overmatched Washington team, shooting 50.8 percent from the field and collecting 41 rebounds. USC has hit 73 or more points in three of their last four games as well. The Huskies have looked a bit sluggish in their last two outings, combining for just 121 points in that span. If the Trojans can get out to an early lead here I think they can cruise to a cover.