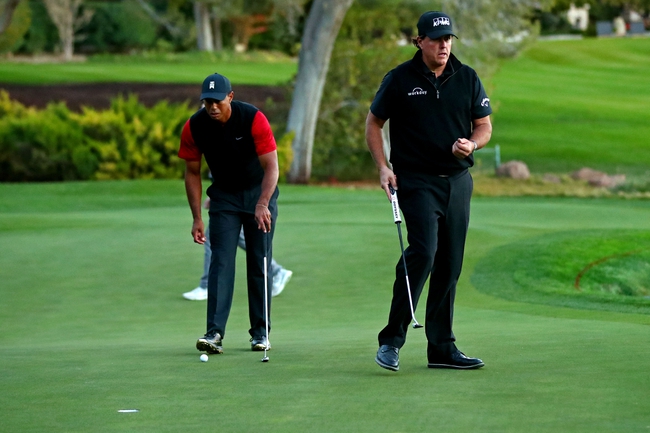 We have another golf event that will raise money for COVID-19 relief, as Tiger Woods and Peyton Manning will square off with Phil Mickelson and Tom Brady this Sunday for the Champions for Charity. The pairs will play 18 holes at the Medalist Golf Club in Hobe South, Florida. The front nine will be a best ball format while the back win will be a modified alternate shot format.

Let’s give a quick breakdown of the teams and try to make some money this weekend on the greens.

Tiger Woods and Peyton Manning, -180 - Tiger Woods wasn’t all that great the last time we saw him, as he was a +11 at the Genesis Open and had to settle for 68th place. With that said, Tiger has looked a lot healthier over the last year and has some impressive showings that includes victories at the Zozo Championship and the Masters a little over a year ago. It’s still going to take some time before Tiger is the consistent, dominating player he was many years ago, but there’s no doubt he’s as sharp as he’s been since his downfall and should be as fresh as he’s been in years. Peyton Manning has played with Tiger in at least four public pro-am events, which includes the 2019 Memorial Tournament Pro-Am in Ohio, and Woods says he’s improved a lot since. Of course, Manning being retried and not playing since the 2015 NFL season has given him plenty of time to get the reps in on a personal level.

Phil Mickelson and Tom Brady, +150 - Phil Mickelson was in rough form before Coronavirus put the world on pause, as he missed the cut in his last two events and four of his last six events overall. Mickelson did have back-to-back third place finishes at the Saudi International and Pebble Beach, but he’s 182nd in driving accuracy percentage and 174th in greens in regulation percentage in 2020. Mickelson was due for a break to clear his head, but I’m not sure this type of break was the one he was looking for given the likely lack of practice reps over the last couple months. Tom Brady has golf history playing the AT&T Pebble Beach Pro-Am several times, but he’s described his golf game as “somewhere between piss poor and pitiful.” Brady also admitted that he’s still 100 percent focused on football and golf will come at a later date. There could be some gamesmanship to those comments, but it certainly doesn’t inspire much confidence when trying to handicap this event.

Pick: Phil Mickelson beat Tiger Woods in Las Vegas a couple years ago when he was the underdog and had questionable form, so there’s reason for consideration with the plus money here as well. However, if we go off what we last saw and the last several events, there’s no doubt that Tiger is the better golfer at this very moment and is hitting the cleaner ball. Also losing The Match and knowing how competitive Tiger is likely tilts the odds in his favor a little more. Tiger is going to want revenge and be on the winning side with the whole country taking this in with the lack of sports.

As for the football players, you have to feel confident in Manning having the edge over Brady. He’s not only had years of retirement to get his game up to speed, but he also has far more successful experience in public events and has played with Tiger a handful of times. Jeff Sherman of the SuperBook at Westgate Las Vegas says he’d make Brady an eight handicap while Manning is a six handicap. An edge is an edge and it feels like we’re getting the two better golfers on the same team.

I’ll lay the juice and side with Tiger and Peyton for the victory.