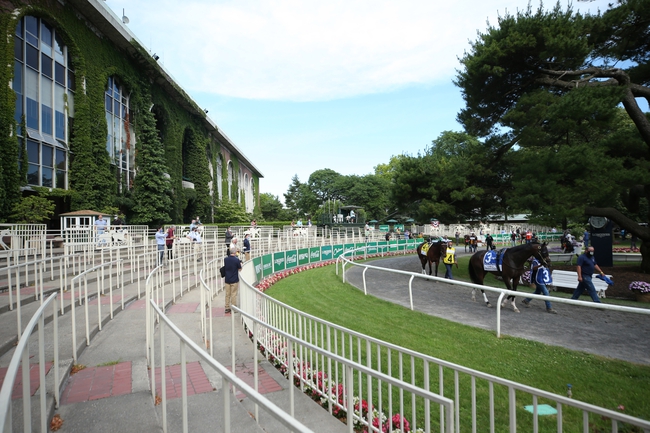 There are nine races at Keeneland Park on Thursday. Here is a look at three of those events.

Race 2 - Maiden Special Weight (Purse -$70,000) Seven 3-to-4-year-old male runners are slated to go one and three-sixteenth miles on the turf. This race appears to more to see who will finish second, third, and fourth.

1 Summer Palace (ML 9/5) is seemingly the clear favorite in this one as the 3-year-old gelded son of Giant Causeway, who shown improvement in each of his three previous races, has registered an Espeed of 90 or better in each of his last three outings. Expect Summer Palace to be among the top flight of horses early in the race, perhaps not out of the gate, however, he definitely has the stamina to go this distance -- having done so before. In fact, Summer Palace has not been involved in a meet of less than a mile. Additionally, he has hit the “ticket” in each of his four outings this year (all on the grass).

#3 Capital Call (ML 6/1) and could be a factor if he stays out of trouble, something that has not been the case in his last two starts. The 3-year-old colt, a son of Tonalist, is a closer and has three cashes in six races this year.

#7 Beachwalker (ML 8/1) is moving back to the special weight division and has four third-place finishes in seven starts, which includes his last effort against $40,000 maiden claimers at Churchill Downs despite encountering major trouble. The 3-year-old gelded son of Street Sensecomes from good pedigree.

4 Alexander Hamilton (ML 5/1) returns to the maiden special weight after two strong second-place efforts at the maiden claiming level. Note: If run on main track, #6 Obsessed should be seriously considered.

Race 6 - Allowance (Purse -$73,000) 12 male runners, along with two also eligibles, are slated to go one and one-sixteenth miles on the turf. This has the potential to be a fantastic race.

#1A On a Spree (ML 9/2), an also eligible, is my unquestioned pick here. On a Spree has been in fabulous form, hitting the board in 11 straight races which include five wins. Overall, the 4-year-old gelded son of Speightstown owns a 33% strike rate on the grass and has reached the podium in 11 of 15 career starts on the turf overall as well as 6-2-2-1 at the current distance.

4 Bundibunan (ML 4/1) has not raced since finishing eighth in the Grade 3 Kentucky Turf Stakes on Sept. 12. The 4-year-old son of Ghostzapper has recorded six top-3 finishes in 12 turf starts, including two wins, and he has a 57.1% WPS percentage at the current distance. But what really caught my eye was two workouts where Bundibunan went four furlongs in 46.6 seconds.

7 Current (ML 3/1) is the class of the field and gets a little relief in distance in this one. The 4-year-old son of Curlin has failed to hit the board in each of his last four starts but he is under the direction of trainer Todd Pletcher, who is 9-2-4-0 at Keeneland during the current fall meet. Current does also have some success at this distance. #11 By Your Side (ML 5/1) has shown improvement in each of his last four starts with the last two outings being on the grass where the son of Constitution recorded a third and second-place finish. He is stretching out from seven furlongs and this will be the first time (second overall) that By Your Side will go this distance on the sod. By Your Side also does have two solid training sessions since his last race.

#13 Kazaringa (ML 5/1) is an also-eligible and has shown the ability to compete at this level. He is 8-3-1-0 in races at this distance. 9 High Promise (ML 12/1) has been lightly raced the past two years but he has been pretty successful in the races where he has started, cashing in nine of 16 career starts. Jockey Julien Leparoux, who has experience on the gelded son of Broken Vow, and trainer Brian Lynch have a strong working relationship.

#9 Julius (ML 6/1) is the fastest of the speed and has run extremely well recently, producing an ESpeed of over 100 in three of his last four races -- resulting in two wins and one-second place finish. While this is the first time that the 5-year-old son of Tapit is trying this distance for the first time, he has fared well at six and one-half furlongs and one mile events. Plus, Florent Gereux -- who has three wins in his last 10 rides at Keeneland -- will likely get Julius to set the pace.

#2 Silver Slate (ML 3/1) has been very consistent and has four top-3 finishes in five career races. The 3-year-old son of Hard Spun, whose last three races have been graded events, has been off since March 21. This is trainer Steve Asmussen’s horse first attempt at this distance but his barn has fared well coming off of 180-day layoff. Silver Slate has been training well recently.

#3 Blackberry Wine (ML 5/1) is coming off a long layoff as well. While he officially broke his maiden two starts ago, the son of Oxbow has competed in four races against winners and has actually crossed the wire first a total of three times -- two wins which were taken away because of being disqualified. Blackberry Wine, who has been training well recently, is racing on Keeneland’s main track and trying the distance for the first time.

#10 Stage Left (ML 5/1) has also put up a couple of strong workouts recently and is coming off a long layoff. He has four victories and eight cashes in 13 career starts. Stage Left is also 4-1-1-0 at Keeneland and 2-1-1-0 at this distance. #5 Uber Kirk (ML 15/1), a closer, is making his second start of 2020 and is coming off a third-place finish after saving ground in a six-furlong, $77,000 allowance race at Churchill Downs on Sept. 20. He has four cashes at Keeneland and two top-3 finishes at the current distance.

#11 Chase Tracker ( ML 20/1) has four cashes in six starts and has experience at this distance.