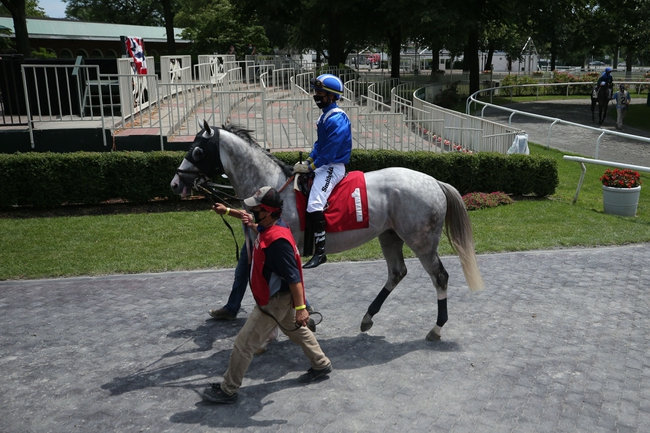 Here is a look at three really good races on Friday afternoon at Belmont Park.

Five 2-year-old fillies will go one mile in what should be a strong race. This appears to be a two or three-horse race.

1 Millefeuille (ML 8/5) is the morning line favorite as she is coming off a strong debut, at this distance, and has produced two solid workouts for trainer William Mott. She also very good pedigree with her sire being Curlin.

5 Plum Awesome ( ML 5/2) is making her debut and while I kind of like her as a result of three very good workouts for trainer Todd Pletcher, whose barn has a 21% career strike rate with first-time female runners, there is a question whether the daughter of Curlin can handle the distance at this point. Pletcher and jockey Luis Saez have a strong work relationship.

4 Mo Dean (ML 5/2) followed his solid debut with a less than expected fifth-place performance, finishing 12 lengths behind Millefeuille. She has put together three strong workouts since the early September race.

Race 3- Maiden Special Weight (Purse -$70,000) Nine 3-year-old fillies, along with two MTO-only entrants, will go seven furlongs on the turf. This should be a good race as well as an excellent betting event.

#6 Dancing Kiki (ML 4/1) is the most experienced of the competitors and has been decently successful, reaching the podium in 58.3% of her 13 career starts. She has recorded two straight top-3 finishes and has accomplished the feat in three of her five attempts on the grass. The daughter of Blame is also getting a reprieve in distance, cutting back from one and one-sixteenth miles in her last outing. Dancing Kiki is also coming off of a strong training session.

#7 Kept Waiting (ML 3/2) will likely be the betting favorite and she is arguably the most talented competitor in the field. However, the daughter of Broken Vow is moving back up to the special weight class, after finishing second against $40,000 claimers in her last outing, and her most recent training session was just average. This will be Kept Waiting’s first race under the direction of trainer Robert Falcone.

#3 Equant (ML 10/1) showed some ability in her debut before coming up empty in the stretch. The offspring of Orb is stretching out from six furlongs though she has registered a couple of decent workouts.

5 Lucky Latkes (ML 7/2), who has shown improvement in each of her last two races and moves to the special weight class for the first time, and #10 Moon Sweeper (ML 6/1) should also be considered in exotic bids.

Six extremely talented 3-year-old and upward male horses will go one mile, in what should be the race of the card.

#6 Money Moves (ML 1/1) is the unquestioned pick here as he is in the best form of all competitors in the field, recording two wins and one second place finish in four career races. The Kentucky Derby participant gets major class relief as well as a shorter distance in this event. Money Moves -- who has a victory at this distance -- also has produced two good workouts for trainer Todd Pletcher, whose horses have a 19% strike rate when coming off a 31-60 day layoff.

#4 Dark Storm (ML 8/1) is racing for the first time in 2020 but he has been training very well recently. Plus, trainer George Weaver -- whose horses have a 29% win percentage over the last year when coming off a 180-day plus layoff -- is having a strong fall meet at Belmont.

#5 Grumps Little Tots (ML 6-1) is coming off a little break, finishing fifth in the one and one-sixteenth mile Deputed Testamony Stakes (Sept. 5), and has experience at Belmont as well as good success at the current distance. The gelded son of Sky Mesa, who has cashed in 12 of his 14 career starts, had an excellent last work out for Saffie Joseph Jr. Plus, Joseph and jockey Irad Ortiz has a 62% WPS percentage when working together over the last 365 days.