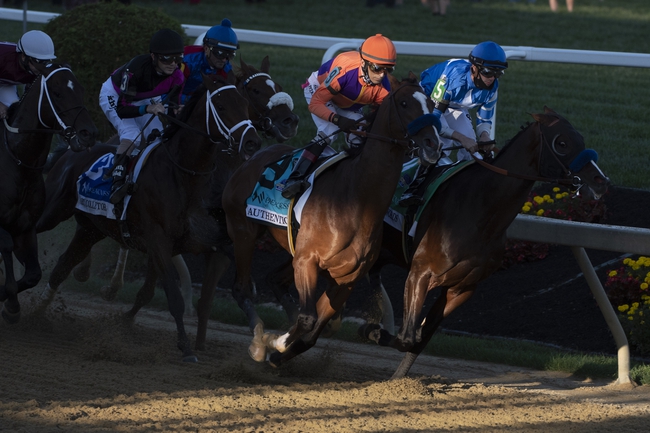 Here is a look at a few of the races on Belmont Park Friday’s card.

Six colts and geldings, including four first-timers, will go six furlongs in what should be a spectacular race.

#3 Nepotism (7/5) who has very good lineage with Union Rags and Sweet Tess -- who garnered six top-3 finishes in her 14 starts -- is making his debut. He has turned in four straight strong workouts with each going four-furlongs at a breezing 48.8 seconds or less -- two of those training sessions coming under 48 seconds which includes producing a time of 47.04 seconds on Oct. 25. Nepotism was purchased as a yearling at $210,000.

#1 Digital Future (8/5) who also comes from very good heritage, with sire Street Boss and dam Moonlit Bay, is making his debut as well. Digital Future, under the direction of trainer Chad Brown, has turned out three recent solid workouts -- two- 4-furlongs and one 5-furlong training sessions -- in handily fashion. Brown’s barn owns a strong strike rate of 19% with first-timers along with a 28% win percentage going six furlongs on the dirt over the past year.

#6 Highway Bound (9/2), a son of Into Mischief, will look for a better result after getting off to a slow start in his debut and finishing dead last. Highway Bound gets relief in distance in this one after going six and one-furlongs on Sept. 26. He also gets blinkers for the first time for trainer William Mott, whose barn has fared well following a break of 31-60 days over the past year.

#5 Thruster (9/2) is another first-timer and he turned out a nice five-furlong training session the last time out. He is definitely someone to consider in exotic bets.

12 two-year-old fillies, including four also-eligibles, will go one and one-sixteenth miles on the grass. Five of 12 non-also eligible runners are first-timers.

Analysis: This should be an excellent betting race with just a total of three competitors having previously gone the current distance. #10 Mendham (4/1) is coming off an improved second career outing -- finishing third going the current distance in what was also his first race on the grass -- and he will once again have Jose Ortiz in the saddle. The son of Munnings turned in a good four-furlong workout on Oct. 23 for trainer Todd Pletcher, whose barn has a 21% strike rate when coming off of a 31-60 day layoff. #7 Cara’s Dreamer (6-1) moves back to the grass after producing a good second-place finish on the dirt in her last outing. The daughter of The Factor, who is a bit of a closer, has three top-3 finishes in five career starts, including a third-place showing in two turf races. #8 Emma and I (20/1), a daughter of the Exaggerator, stretches out to one-and one-sixteenth miles from six furlongs and is coming off a good workout on Oct. 25. #6 Marvelous Maude (3/1) and #2 Duckphat (12/1), a daughter of Quality Road, are making their debuts and should be considered in exotic bets.

Six 3-year-old fillies will go one and one-sixteenth miles on the dirt.

Analysis: This race is pretty wide open, although I am not sure I would call this a great race as only two of the competitors have previously gone ths distance. #6 Portofina (6/1) is the most experienced of the competitors at this distance, although this will be her first attempt on the main track at Belmont Park. The daughter of Malibu Moon, who was purchased for $210,000, is racing for the first time for trainer Thomas Morley while also racing on the dirt for the first time in five outings. #5 Calidad (6/1), a daughter of Quality Road, has experience at this distance and at Belmont Park. She has also medaled twice in four career starts on the dirt. #2 Wasp (3-5) is stretching out after finishing second in a six and one-half furlong event on Oct. 4. The daughter of American Pharoah, who was purchased for $350,000, is under the direction of the Todd Pletcher/Irad Ortiz Jr. tandem for the first time -- Pletcher and Ortiz Jr. have a 59% WPS percentage when working together. Pletcher’s barn also has a 22% strike rate when going this distance on the dirt and a 21% win percentage when going from sprint to route. #1 Bella Domenica (4-1) has shown improvement in each of her last three starts.