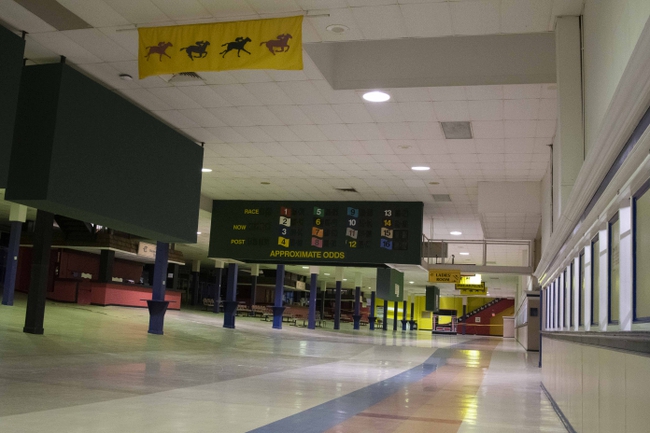 Here is a look at a few of Saturday’s 10 races at Aqueduct.

#1 Calidad (12/1) gets significant distance relief after finishing fifth in a one and one-sixteenth mile race on Oct. 30. She finished second at this distance here at Aqueduct in her debut back in March. Gets weight relief with apprentice jockey Luis Cardenes in the saddle.

#2 Lucky Lizzie (8/1) is racing for the first time since November 2019. Lucky Lizzie has turned in two solid workouts for trainer William Mott recently. Outside shot.

#3 Snicket (6/5) has been extremely consistent since finishing sixth in her debut, recording five straight top-3 finishes. Snicket -- who was purchased for $400,000 in 2019 -- nearly broke her maiden the last time out but was literally nosed out at the wire by Monificient. Four of her five cashes have been at this distance. A stalker, the daughter of Lemon Drop Kid went four-furlongs in 47.50 seconds in her last workout. Favorite with good reason.

#4 Beautiful Karen (4/1) is looking for a third top-3 finish in four starts in her return to Aqueduct. This will be Competitive Edge’s daughter’s first time at this distance as well as the shortest race of her career. Trainer, Karen Rice horses, has hit the board eight times in 15 starts during the winter meet at Aqueduct. Beautiful Karen, who likes to be in the top flight of horses, is a contender here.

#5 Munnings Musings (5/2) has a field best early pace rate of 86. The daughter of Munnings has shown slight improvement in race No. 2 and No. 3 of her career. Pacesetter who should benefit from the slight distance relief in this one. Contender.

#6 Vienna Code (30/1) is making her debut on the dirt. Showed some outstanding speed the last time out before dropping out of contention. Turned in an outstanding workout session a couple of days ago for trainer Andrew Williams. A longshot who may be able to hit the bottom of your ticket.

Race 2 - Maiden Special Weight (Purse- $70,000) Twelve 2-year-old colt and geldings will go one and one-sixteenth miles on the turf.

#1 Action Jackson (10/1) is making his debut and has been training decently well for Saffie Joseph Jr., who has a 12% strike rate with first-timers and 19% winning percentage at the special weight division. Union Rags son.

#6 Vodka Lemonade (3/1) ran well in his debut at this distance but lost a duo in the stretch and finished second. Turned out a decent workout recently for trainer Mike Maker, who has a 25% strike rate teaming with Irad Ortiz Jr. over the last year.

#11 Scotty (15/1) is stretching out to the current distance for the first time. He did have two good workouts recently.

#3 Ruse (6/1) finished third at this distance the last time out, just two and one-half lengths behind the winner. John Velaquez, who has seven cashes in 13 rides during the current meet, gets another chance on the gelded son of War Dancer. A stalker, Ruse is a contender.

#9 He’s a Lucky Devil (6/1) should be primed for a better outing in his second start after finishing fifth behind both Ruse and Vodka Lemonade.

#12 Hangout showed some promise in debut before giving out after going three-wide in debut. Stretching out from six furlongs.

Race 4 - Allowance Optional Claiming (Purse - $84,000) Seven colts and geldings will go one and one-eighth miles on the turf. This should be an outstanding affair.

#1 Conviction Trade (4/1) showed improvement in each of the last two starts and has raced pretty consistently overall since April. The 4-year son of Exchange Rate, who was purchased for $275,000, is coming off a victory in a $50,000 claiming event, where he was claimed and moved to Mike Maker’s barn. Contender though probably better used in exotic bets.

#2 Arthur Kitt (6/1) is a European horse that earned a second-place finish in debut. This is his fourth race on American soil though he was recently moved to Christophe Clemente’s barn. A closer, the Great Britain colt is 12-2-3-0 on the turf.

#3 Value Engineering (2/1) has yet to fail to hit the board and is coming off a race where he posted a career-best Beyer speed for 107. First race at Aqueduct and this distance.

#5 Winning Factor (6/1) is in excellent form having failed to hit the ticket just once in his last 12 outings and owns a 13-3-5-3 record on the grass. Has a victory and two second-place finishes in allowance races.