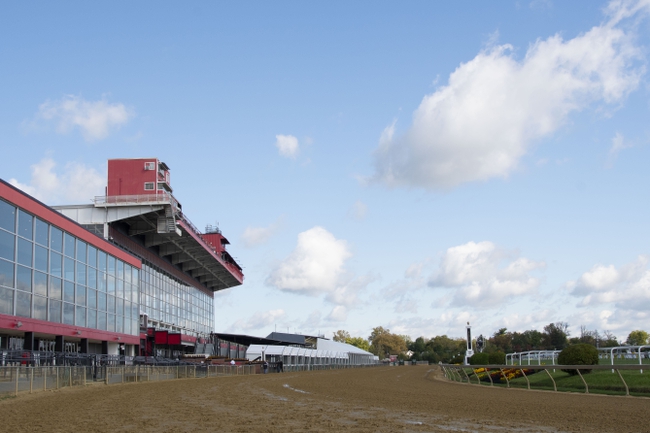 Remington Park continues its afternoon slate of races on Monday, here is a look at three of them.

Six 2-year-old fillies will go one mile on the dirt. Here is a look a the runners.

1 Canada Candy (2/1) has shown improvement in each of her last three starts while she had issues in her last start, the daughter of Australian sire Vancouver finished fifth at this level though she was just one and a quarter behind the winner. Stretching out to a mile for the first time. Trainer Scott Young has fared well at this distance and on the dirt along with at maiden claiming events.

2 Dutchess Bubbles (3/1), a closer, has not raced in about a month. The daughter of Bodemeister has shown improvement in each of her last two outings and now finished third in both of those events held at Remington Park. Dutches Bubbles adds blinkers as well as stretching out for the first time.

#6 Adele's Bling (10/1) has yet to hit the board in three career starts but she has increased in distance in each event. This is her second race off of a three-month break.

#5 Moonshine Moxy (4/1) is trying the dirt for the first time after failing to hit the board in each of her four races on the grass. The only competitor to have previously raced this distance.

#3 Repo Girl (6/1), daughter of Empire Maker, and #4 Itsgoodtobeking (4/1) are both making their debuts and are under the direction of Ronnie Cravens.

Seven colts and gelding will go one mile on the dirt. These foes are very familiar with each other and it appears to be a four-horse race. Here is a look at the top contenders.

#1 Smoke N’ Policy (5/2) is in the best form of his life with eight cashes in 10 starts, including two victories. The 6-year-old gelding is coming off a second-place finish -- just three-quarters of a length behind Gospel Abe -- in a one-mile and 70-yard affair as Smoke N’Policy rallied by going six wide during the later stages of the race. This will be his second effort for trainer Karl Bromberg, who has an 18% win rate at this distance and surface as well as a 19% strike rate in claiming events this past year. Has a 1-2 record against Gospel Abe, 0-1 vs. Swannyland, and 1-0 against Seattle Thunder. Runs well at this distance. Contender.

#2 Gospel Abe (2/1) has raced a ton this year, as this event marks his 16th race of 2020, and has been wildly inconsistent with just six cashes and earning his third victory of the campaign in the last outing. Trainer Frederico Villafranco horses have a 22% win percentage when coming off a victory over the past year. Gospel Abe is 2-1 vs, Smoke N’ Policy, 0-1 vs Swannyland as well as 2-0 vs Seattle Thunder, and 0-1 against Sticknwiththeguys. Has a field-high seven wins at RP.

#6 Seattle Thunder (4/1) has also been inconsistent this year, but, along with Smoke N’Policy, the 6-year-old gelded son of Air Commander are the only two competitors in the field to have over 50% WPS percentage on the dirt for his career. He also has a field-best six career victories along with a 50% WPS percentage at the current distance.

#7 Touch’Em Up (5/1) has three cashes in the last five starts. Jockey Ramon Vazquez gets the ride.

#1 Super Cat Speed (8/5) has shown improvement in each of his last two outings and is coming off the best finish of his career the last time out as he finished third at this level and distance. He is 2-0-0-1 on the dirt and 3-0-0-1 at this distance. Trainer Steve Asmussen has a 20% win percentage in maiden claiming events over the past year.

#2 Mayfair Heights (10/1) has struggled the last two races on the turf though he does get a major relief in class in this one. This is the 3-year-old gelded son of The Factor's first race on the dirt since the end of July. Mayfield Heights has two third-place finishes on four outings on the dirt as well as 6-0-0-3 at the current distance. He produced a nice five-furlong workout on Nov. 7 for trainer Kari Craddock.

#5 Daddy Jack (5/1) is coming off the best effort of his career as he finished second after jumping a fallen foe. It was his first-ever cash in 10 starts though he is 3-0-0-1 in one-mile affairs.

#6 Hecouldgoalalltheway (6/1) returns to the maiden special weight after ninth in a $7,500 claimers non-winners of two despite not officially having broken his maiden. The 3-year-old gelded son of Kitten Joy crossed the finish line at this level two starts back but was Dq’d to eighth. He has turned out two really nice workouts recently.