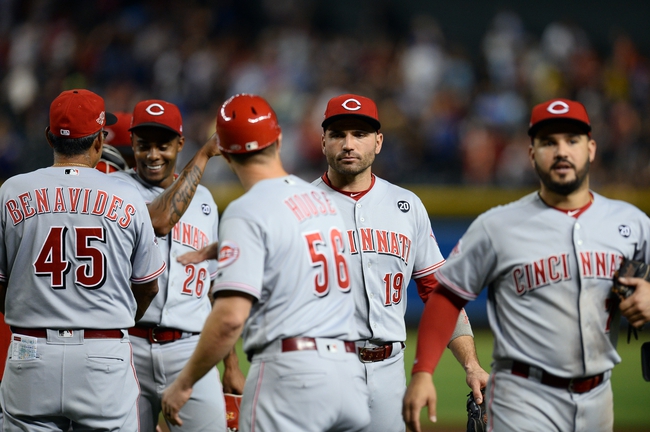 A Look at the Cincinnati Reds for the 2020 MLB Season

The Cincinnati Reds won a decent 75 games last year and could be in contention for a wild card spot if they can build on those efforts this time around. The Reds haven’t made the postseason since 2013. In a NL Central where things can change rather quickly and there’s no juggernaut at the top of the division, the Reds have to like their chances to be competitive in 2020 and possibly end this playoff drought. Get Free MLB Picks and MLB Predictions for the Cincinnati Reds all season long for every game at Sports Chat Place

Additions: The Reds get Japanese star Shogo Akiyama, and he’s expected to be their leadoff hitter. Akiyama is a two-time golden glove winner in the Pacific League and a five-time NPB All-Star. Akiyama has a .300 batting average and 102 homers with 467 RBI in the NPB. Three-time all-star Mike Moustakas comes over, and he’s fresh off possibly his best year yet where he had 35 home runs and 87 RBI with the Milwaukee Brewers. Nick Castellanos is also coming off a solid season with the Detroit Tigers and Chicago Cubs, and he should thrive in the middle of this Reds lineup. Wade Miley makes for a decent back of the rotation starting pitcher, as he’s good for 150-plus innings, and he’s coming off a season with the Houston Astros where he averaged 7.5 strikeouts per nine innings.

Subtractions: Jose Iglesias leaves for Baltimore after one season with the Reds in which he hit .288 with 59 RBI and 11 home runs. Jose Peraza is now with the Boston Red Sox after four seasons with the Reds and producing a combined 153 RBI, a .274 batting average and 74 stolen bases. Alex Wood is also back with the Los Angeles Dodgers after pitching just 35.2 innings with Cincinnati and posting a 5.80 ERA with 30 strikeouts and nine walks.

Season Outlook: The Reds seriously beefed up their lineup to provide protection for guys such as Joey Votto and Eugenio Suarez, and they could easily go from being 25th in runs scored a year ago to having an above-average offense. On paper, the Reds have an everyday lineup that should be able to put up crooked numbers far more consistently. A starting pitcher one-two punch of Sonny Gray and Luis Castillo is more than respectable, and that starting rotation gets an even bigger boost with a full year of Trevor Bauer. Bauer wasn’t good in 10 starts with the Reds last season, but he’s had time to adjust to the change of scenery and his strikeout numbers are still highly impressive. The Reds are a more balanced team than they were a season ago and the offense is going to be highly improved. I was high on the Reds last year and they let me down a bit, but there’s no reason not to double dip with the additions they made. I’ll be watching the Reds closely this season.