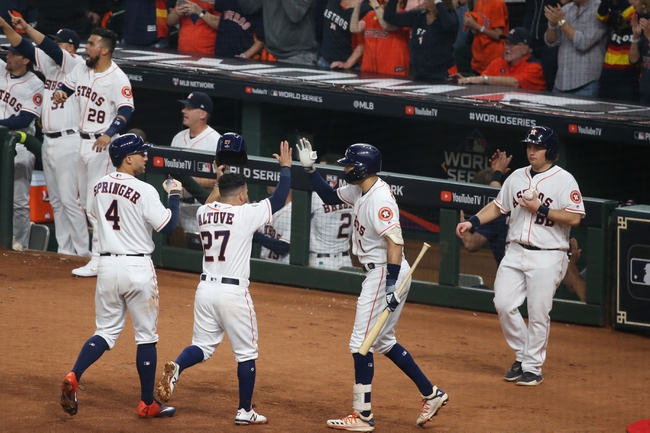 A Look at the Houston Astros for the 2020 MLB Season

The Houston Astros have made the World Series in two of the last three seasons and enter this year as a top contender to bring home the hardware once again. The concern is that the Astros have been dealing with a cheating scandal all offseason, the whole league is pissed at them, and they have a new manager in Dusty Baker. There are questions about how the Astros are going to handle the backlash on the field and if AJ Hinch no longer being in the clubhouse impacts has a negative impact. Get Free MLB Picks and MLB Predictions for the Houston Astros all season long for every game at Sports Chat Place

Additions: The Astros added backup catcher Dustin Garneau, who is averaging 67 at bats and 14 hits the last three seasons. The Astros also traded for relief pitcher Austin Pruitt, who has a career ERA of 4.87, a WHIP of 1.36 and 147 strikeouts in three seasons. Outside of those two small additions, the Astros will enter with much of last years squad intact.

Subtractions: Probably the biggest change in all of baseball this offseason was watching Gerrit Cole leave the Astros for the New York Yankees. Cole has been arguably the best pitcher in baseball the last two seasons and has been nothing but money in the playoffs as well. That’s a massive blow to this Houston rotation. The Astros also lost pitchers Collin McHugh, Wade Miley and Will Harris. Miley started 33 games last year, Harris had a 1.50 ERA in 60 innings and McHugh played in 195 games in six years with Houston. Catcher Robinson Chirinos leaves for the Texas Rangers and outfielder Jake Marisnick is with the New York Mets. That duo combined for 27 home runs and 92 RBI last season.

Season Outlook: Tipping pitches jokes aside, the Astros still have an absolutely stacked offense with a lineup that features George Springer, Jose Altuve, Michael Brantley Alex Bregman, Yuli Gurriel, Yordan Alvarez, Carlos Correa, Josh Reddick and Martin Maldonado. That batting order is arguably the best in all of baseball and things won’t change much even if they don’t know what pitch is coming. You can also do a lot worse than a starting pitching duo of Justin Verlander and Zack Greinke. The Astros are still very, very talented and are more than capable of making another World Series run. However, the loss of Cole is huge, and I’m not exactly sold on Baker as a manager in 2020. The AL West is also no longer a two-man race with the Astros and Oakland A’s, as the Los Angeles Angels improved a great deal this offseason. There’s just a lot of distractions going on in Houston and losing an ace is never good. I’ll take the under the win total.