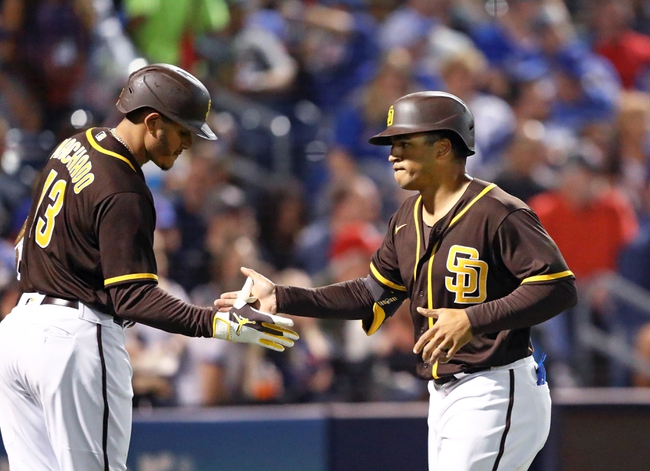 The San Diego Padres have finished last in their division in three of the last four years and haven’t made the postseason since 2006. In other words, the Padres haven’t seen playoff baseball since I’ve graduated high school. The good news is the Padres have been building towards a turnaround and many think this is the season they could end the drought. Get Free MLB Picks and MLB Predictions for the San Diego Padres all season long for every game at Sports Chat Place

Additions: The Padres were quite busy this offseason, adding Tommy Pham, Trent Grisham and Jurickson Profar to the everyday lineup. Zach Davies was added to the starting rotation while Drew Pomeranz, Pierce Johnson and Emilio Pagan are in the bullpen. Davies was the big addition this offseason, as he has a career 3.91 ERA and 1.29 WHIP. Pham has been a consistent contact hit throughout his career and adds speed at the top of the lineup, while Profar is a versatile infielder who has hit 20 bombs each of the last two years. Pomeranz is a pitcher with starting experience, so he has a chance to thrive in the bullpen where he can empty the gas tank for an inning or two.

Subtractions: Hunter Renfroe leaves for Tampa Bay after four years in San Diego where he hit .235, had a .294 OBP and had 89 homers and 204 RBI. Eric Lauer is in Milwaukee after two years with the Padres where he had a 4.40 ERA, 1.46 WHIP and 238 strikeouts in 261.2 innings. Nick Margevicius ends up in Seattle after one season with the Padres and Robbie Erlin is with the Pittsburgh Pirates after six seasons in SD.

Season Outlook: The Padres are clearly going for it, as they’ve been busy the last two years with adding as much talent as possible and there’s a lot to like about this team. Fernando Tatis Jr., Manny Machado and Eric Hosmer have more protection in the batting order, and it should drastically improve an offense that was 27th in runs scored. Having Davies as a No. 3 starter behind Chris Paddack and Garrett Richards strengthens the starting rotation, while a revamped bullpen should improve what was a slightly below average pitching staff last season. It’s not going to be easy to breakthrough the NL West with the Los Angeles Dodgers still at the top and the Arizona Diamondbacks improving a great deal, but the Padres have the talent to get the job done and have an aggressive front office that’s willing to take risks. I’m buying stock in the Padres this season.