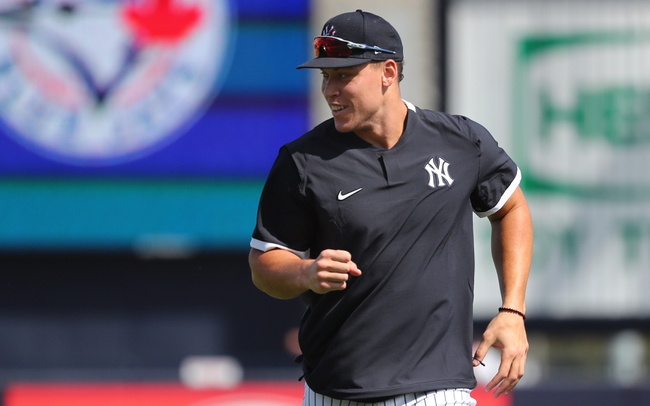 The New York Yankees come into the 2020 campaign looking to build on back-to-back 100-win seasons and their first AL East division title since 2012 after posting a 103-59 record last season, sweeping the Twins before losing a now-controversial series to the Houston Astros in six games in the ALCS. Get Free MLB Picks and MLB Predictions for the New York Yankees all season long for every game at Sports Chat Place

Additions: The lone major signing for the Bronx Bombers was arguably the biggest, as the Yankees won the free agent lottery, acquiring the services of Gerrit Cole for $324 million over nine years after Cole posted a 20-5 record with a 2.50 ERA and 326 strikeouts for the Houston Astros last season. Cole headlines and rounds out the top pitching staff in the AL East alongside Luis Severino (who finally appears to be healthy), James Paxton and Masahiro Tanaka.

Subtractions: The Yanks lose some role pieces from last year’s roster, as Dellin Betances, who was widely regarded as the set-up man for Aroldis Chapman, chose not to re-sign, as did role position players like Cameron Maybin and Austin Romine. Another major subtraction for New York from last year’s team is Aaron Hicks, as the Bronx Bombers lost their starting center fielder for the upcoming season after having Tommy John Surgery but the silver lining is that New York brings back Brett Gardner who showed he still has a lot to offer and is more than a serviceable outfielder for New York.

Outlook: It was simply a case of the rich getting richer with the Yankees, as New York already won 103 games with a lineup that had its fair share of issues with missing Luis Severino, no Giancarlo Stanton among others. Now both Severino and Stanton are back (for now), and Gerrit Cole is added to the mix with Aaron Judge, Gary Sanchez, Gleyber Torres and co. I’m not sure Boston struggles as badly as they did last year, maybe they do, who knows. But another division title and another 100-win season appears in the Yankees’ future, and the Bronx Bombers look to be a front-runner for their first World Series crown since 2009.