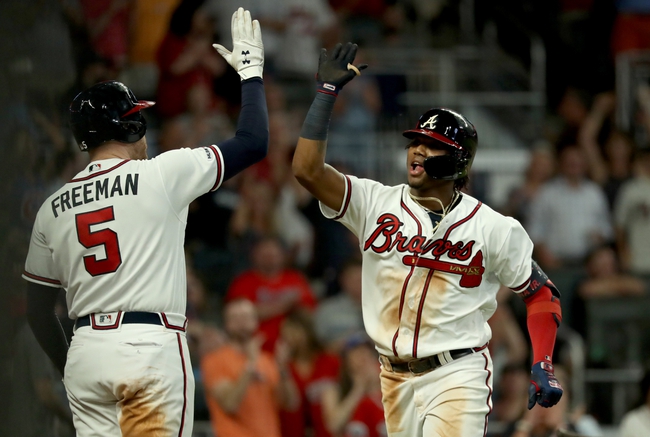 Prediction On Who Is Going To Win The NL East

The Atlanta Braves or Washington Nationals have won the National League East in seven of the last eight years, and with the Nats defending World Series champions and the Braves a top-five favorite to win it all, most probably wouldn’t expect a change this season. Let’s quickly break this division down and see if we can find some value. Get Free MLB Picks and MLB Predictions all season long for every game at Sports Chat Place

Here are the betting odds and prediction to win the NL East in 2020.

Atlanta Braves, +175 - The Braves already had one of the more explosive offenses in baseball, and they now added depth to the middle of the order with Marcell Ozuna and Travis d'Arnaud. The Braves should be top-five in runs scored this season and no lead will be safe. The addition of Will Smith to the bullpen will fix some of the finishing issues the Braves had last year and a starting pitcher one-two punch of Mike Soroka and Max Fried will become more consistent as they gain experience. Sometimes it feels like Atlanta sports are cursed, but this Braves team should feel like World Series or bust.

Washington Nationals, +250 - Washington Nationals lost some key pieces from last years championship squad, but a starting pitching rotation that includes Stephen Strasburg, Patrick Corbin, Anibal Sanchez and Max Scherzer can go toe-to-toe with anybody and is enough in itself to think this team can repeat. I’m not all that high on Starlin Castro stepping in near the top of the order with Anthony Rendon now in Los Angeles, but Juan Soto is a bubbling superstar and Trea Turner and Adam Eaton are good contact hitters who can set the tone of this offense. The Nats aren’t sexy, but the four starters they’re throwing out twice a week gives them a chance to win whenever, wherever.

New York Mets, +280 - The New York Mets had a stretch last season that showed what this team is capable of and they should have increased expectations with Yoenis Cespedes soon back in the lineup and a full season of Marcus Stroman. With Jacob deGrom, Noah Syndergaard and Stroman leading the starting rotation, the Mets have the arms to push through like the Nationals did last season. Michael Wacha and Dellin Betances strengthens a Mets bullpen that already had Edwin Diaz closing the door. Every year the Mets seem to look good on paper but always seem to fall apart. Maybe this is the year things change?

Philadelphia Phillies, +400 - The Philadelphia Phillies were the offseason champions last year but didn’t live to those expectations, and it kind of feels like these odds are hanging onto that. The Phillies have a stacked batting order of JR Realmuto, Bryce Harper, Jean Segura, Rhys Hoskins, and the addition of Didi Gregorius adds experience and some clutch hitting in the middle. The Phillies have to find consistent starting pitching behind Aaron Nola, as Zack Wheeler can be hit or miss and Jake Arrieta isn’t exactly what he was a few years ago. Still, there’s some upside with the Philadelphia Phillies.

Miami Marlins, +30000 - The Miami Marlins weren’t terrible last season, and they now enter this year with a stacked farm system, some young players on their everyday roster who are starting to spread their wings, and they bulked up their batting order with Jonathan Villar, Corey Dickerson and Jesus Agullar. Sandy Alcantara and Caleb Smith are future all-star pitchers leading the front of the rotation and a revamped bullpen of Brandon Kintzler, Yimi Garcia and Brad Boxberger could surprise some folks. The Marlins are heading in the right direction and have oodles of prospects who could get called up at some point to add a spark. Unfortunately, the fish are still very young and in a division where there’s four teams that have playoff hopes.

I’m always looking for value in my future bets, as I want good bang for my buck if I’m going to have my money tied up for six months. I play a lot of long shots when looking at futures. However, getting the Braves and nearly two times my money is a bet I can’t pass up. The Braves have a roster that can win the World Series this season and have gained enough experience these last two years that will help them get over that hump. The Nats have a potential WS hangover, the Mets let us down year after year and it’s hard to ignore how bad the Phillies looked last year, even if their roster is still very talented. The Marlins are a year or two away from seriously being a threat.

I’ll take my chances with some long shots in other divisions, but I have the Braves winning the NL East all day long.

The pick in this article is the opinion of the writer, not a Sports Chat Place site consensus.
Previous Pick
Who Has The Most Stolen Bases In MLB History?
Next Pick
American League East 2020: MLB Division Pick, Odds, and Prediction