Which MLB Teams Have the Most Home Runs in a Season? 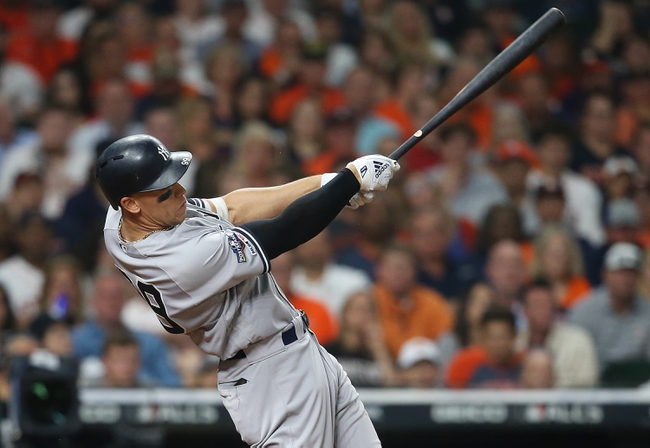 The MLB Teams with the Most Home Runs in a Season

The home run is the most exciting occurrence in baseball, and many modern-day squads build their lineups around the long ball. Seems like every year at least a couple of teams flirt with the all-time single-season MLB home run record, so we’re sure to see many future changes on this list. Get free MLB Picks and MLB Predictions all season long for every game at Sports Chat Place.

These are the MLB teams with the most home runs in a season.

2. New York Yankees, 306 (2019) - Hot on the heels of Minnesota in 2019 were the Bronx Bombers in New York, with 306 team home runs. Gleyber Torres was the team leader with 38, followed by Gary Sanchez (34) and DJ LeMahieu (26). Had Aaron Judge and Giancarlo Stanton not missed extended time with injuries that season the Yankees’ 2019 team home run total would have been even higher.

3. Houston Astros, 288 (2019) - The 2019 Astros squad posted the highest team slugging percentage in MLB history (.495), but finished a distant third in the home run total with 288. Alex Bregman led the way with 41 homers that season, but Houston’s sign-stealing scandal will cast a shadow (and maybe some record-book asterisks) over this team, so call it what you will.

4. Los Angeles Dodgers, 279 (2019) - The Dodgers were a National League force in 2019, as evidenced by their 279 homers that season. Cody Bellinger got off to a red-hot start and finished with a team-high 47 homers, while Joc Pederson (36) and Max Muncy (35) aided the cause very well themselves.

5. New York Yankees, 267 (2018) - One season prior to the 2019 home run barrage, the Yankees broke the MLB single-season team home run record with 267. This was largely thanks to the acquisition of Giancarlo Stanton, who slapped a team-high 38 dingers. Aaron Judge missed some time to injury but still hit 27 home runs, as did rookie Miguel Andujar.

6. Seattle Mariners, 264 (1997) - Back in 1997 Ken Griffey Jr. was the biggest star in the Major Leagues, turning in the first of his back-to-back career-high 56-homer seasons. Jay Buhner crushed 40 home runs himself, while Alex Rodriguez had a relatively down year with only 23 homers. The Mariners’ team home run output that season would put them atop the all-time record list for over 20 years.

7. Texas Rangers, 260 (2005) - The 2005 Texas Rangers flirted with the all-time record for team home runs in a season, but came up just short. That Texas squad was buoyed by Mark Teixeira’s 43 homers. Teixeira had a stellar season that year, slugging .575 and earning a Gold Glove at first base (he would earn another the next season as well) while playing in all 162 of the team’s games.

8. Oakland Athletics, 257 (tie, 2019) - We’ve got a three-way tie at the bottom of the top 10 season home runs list, the most recent entry belonging to the 2019 A’s. The dynamic duo of Matt Chapman and Matt Olson provided 36 homers apiece, and this total would have been higher if not for the struggles of Khris Davis, who put up an underwhelming 23 dingers that year.

8. Toronto Blue Jays, 257 (tie, 2010) - The 2010 Jays team had a breakout star in Jose Bautista, who bopped 54 homers to lead the squad that year. Toronto boasted a well-balanced power lineup that season, with a half-dozen other players hitting at least 20 home runs.

8. Baltimore Orioles, 257 (tie, 1996) - The earliest entry on the MLB team home run record list is the ’96 Orioles, who got a boost from the statistical anomaly of 50 home runs from Brady Anderson; that’s more than twice what he hit in a season before or after during his career. Baltimore broke a 35-year-old team home run record with this campaign—the old record was 240, set by the Yankees. The O's would only hold the top spot for one season, however.