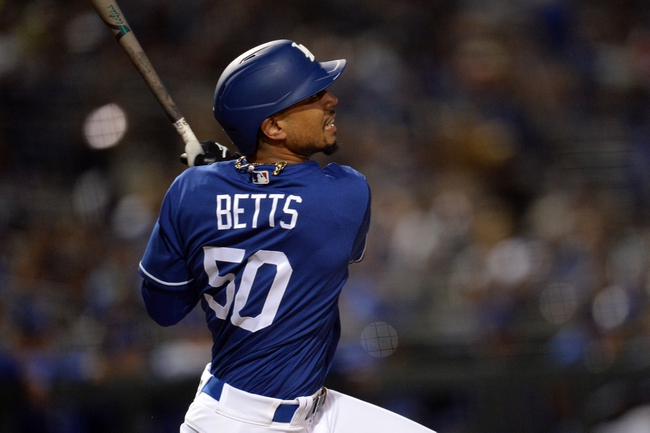 Prediction On Who Is Going To Win The NL West

The Los Angeles Dodgers have won the National League West each of the last seven years and are the biggest favorites in all of baseball to win their division this season. The Dodgers have won nine of the last 12 division titles overall. Is there even a point in trying to bet another team this season? Get Free MLB Picks and MLB Predictions all season long for every game at Sports Chat Place

Here are the betting odds and prediction to win the NL West in 2020.

Los Angeles Dodgers, -800 - No team is a bigger favorite to win their division this season than the Los Angeles Dodgers, as they return nearly last years entire squad while adding an MVP in Mookie Betts and two veteran starting pitchers in David Price and Alex Wood. There’s zero concerns with the Dodgers in the regular season, it’s all about getting over that hurdle come October and finally bringing a World Series to Los Angeles.

Arizona Diamondbacks, +900 - The Arizona Diamondbacks were decent last season and were slightly above average in both hitting and pitching, so they went out and added some impressive names. Starling Marte and Kole Calhoun both add some pop to the batting order, but they’re also solid defensively and will get the job done in the outfield. Madison Bumgarner probably isn’t what he once was as he approaches 31 years old, but he’s not washed yet, and he allows guys such as Mike Leake and Robbie Ray to be the No. 2 and No. 3 pitchers they truly are. The Arizona Diamondbacks have the potential to be sneaky good this season.

San Diego Padres, +1200 - The San Diego Padres didn’t come close to living up to expectations last season, but they hope the additions of Tommy Pham, Trent Grisham and Jurickson Profar can improve an offense that was 28th in batting average and 27th in runs scored. Zach Davies does add depth to the starting rotation, while Drew Pomeranz and Emillio Pagan should add life to a Padres bullpen that was 19th in relief ERA a year ago. Manny Machado should be more comfortable in his new surroundings and we have yet to see Fernando Tatis Jr. really spread his wings. The San Diego Padres have the pieces in place, it’s just a matter of finally playing to the level people expect.

Colorado Rockies, +5000 - The Colorado Rockies were one of the most disappointing teams in the league last season, and they didn’t do a single noteworthy thing this offseason. The Rockies have arguably the worst pitching staff in baseball, and there’s been rumors flying around that they’ve considered trading all-star third baseman Nolan Arenado. There’s just not a lot to like about the Colorado Rockies right now.

San Francisco Giants, +10000 - The San Francisco Giants no longer have Bruce Bochy in the clubhouse, they watched a lot of key players leave this offseason and the top players on this years roster are another year older. Guy like Bandon Crawford, Evan Longoria and Buster Posey are up there in age and can’t be expected to carry a team anymore. There’s not enough easy runs in this Giants lineup and the starting pitching doesn’t scare anybody. The return of Johnny Cueto should help, but we’re grabbing at straws if trying to find a whole lot to like about this roster. The Giants should have blown things up when they had the chance to stockpile a thin farm system. It’s going to be a long rebuild.

Picking another team besides the Dodgers to win the NL West is almost a waste of time. However, if you’re being forced to bet this division, you have to, as placing a bet on -800 juice and having that money sit for six months is a waste of time. So, give me the Padres and a chance to make 12 times my money. The Padres made a lot of positive additions this offseason and have about as much upside as anyone when you consider the young names they can call up and the young talented players already on this roster who are eager to make a name for themselves.

The Dodgers are going to win the NL West, but if I have to bet on a team, I want some bang for my buck. Give me the Padres.

The pick in this article is the opinion of the writer, not a Sports Chat Place site consensus.
Previous Pick
American League Central 2020: MLB Division Pick, Odds, and Prediction
Next Pick
Who Has The Most Stolen Bases In MLB Single Season?