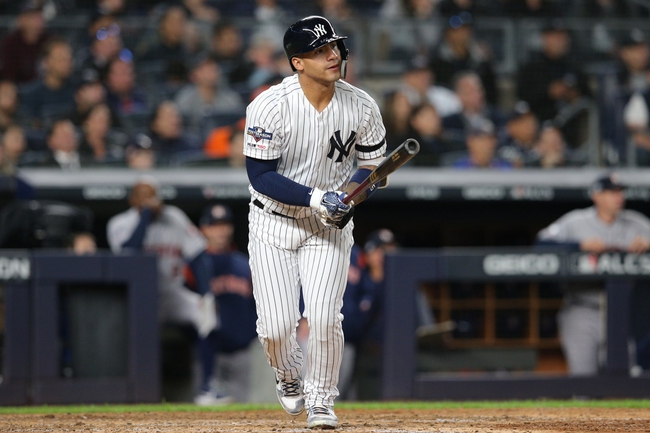 As we continue to wait out the coronavirus, we should be spending time researching and finding an edge on things we can bet leading up to when sports return. This article, I’ll be looking at three players who could lead major league baseball in home runs this season. Of course, I look at odds that have some meat on the bone when betting futures, as I want a decent return if my money is going to be tied up for several months.

Here’s three players worth betting on when it comes to leading the MLB in homers this season.

Yordan Alvarez, +1400 - In just 87 games and 313 at bats last season as a rookie, Yordan Alvarez hit 27 home runs and had 78 RBI. That’s a 162 game average of 50 home runs and 145 RBI. If those numbers hold true, Alvarez would have finished second in baseball last season and just three homers shy of the leader Pete Alonso. Alvarez has to work on his plate discipline and you’d like to see him hit a bit higher in the lineup to give us more at bats, but there’s no doubt the power is there to lead the majors in home runs. This is a solid price with a promising power hitter.

Gleyber Torres, +2500 - Gleyber Torres is a young player who has improved in each of his first two seasons and you feel like he’s just scratching the surface. Last season, Torres hit 38 homers in 546 at bats, so he has 62 bombs in 267 games and is averaging 38 homers through a 162 game average. As the confidence and experience grows, Torres is only going to get better, and he’s going to see a lot more hittable pitches this season with a healthy Giancarlo Stanton and Gary Sanchez in the order. You should be buying stock in Torres wherever you can, as he’s a rising star and in a very good situation.

Mike Trout, +1100 - Mike Trout hit 45 home runs last season, setting a new career high and we could see a bigger spike in power as he’s just now entering his athletic prime at 28 years old. Trout is worthwhile because he hits high in the lineup and is averaging 473 at bats over the last four years. Also, Trout will be hitting ahead of Anthony Rendon and a healthy Shohei Ohtani. This is easily the most protection Trout has had in his career, so while he’s considered the best player in the world, he’s going to see better pitches with elite bats behind him. The best is yet to come with Trout.

The pick in this article is the opinion of the writer, not a Sports Chat Place site consensus.
Previous Pick
What's The Record For Most Hits In A MLB Single Season?
Next Pick
Which MLB Closer Recorded the Most Saves in a Single Season?