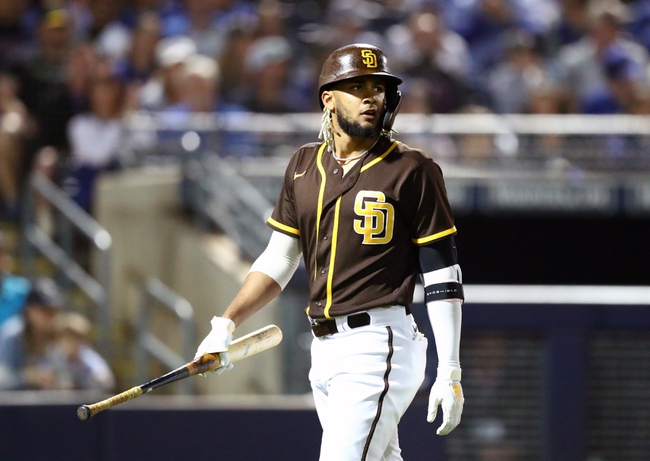 The San Diego Padres have a difficult National League West battle ahead in the 2020 MLB season.

San Diego made some progress in the win column last season but still fell far short at 70-92 overall. That mark left the Padres in last place in the NL West and out of the playoffs for the 13th straight season. In 2020, San Diego will try to ratchet up their win percentage even further as the team attempts to regain relevance in the division. Check back all season long for free MLB picks and MLB predictions at Sports Chat Place.

Let’s take a closer look at San Diego’s current status and break down the team’s chances at hitting their projected win total this season.

It was another lost year for the Padres in 2019, as the team finished a whopping 36 games behind an excellent Dodgers team in the National League West standings. San Diego’s .432 win percentage looks pretty ugly, but there are a few positives here. The Padres had a winning season series record against some solid NL teams, including the Nationals (4-3), Cardinals (4-2) and Brewers (4-3). That said, the division games didn’t go so well; San Diego was 8-11 versus the Diamondbacks and Rockies, 6-13 versus the Dodgers and 9-10 versus the Giants.

The Padres will have to buckle down in those divisional games in 2020, because they’ll comprise two-thirds of the shortened 60-game season schedule. San Diego will play 10 games each versus the Dodgers, Diamondbacks, Giants and Rockies, and the other 20 games will come against the AL West. The Padres get relatively manageable matchups versus the Rangers, Angels and Mariners, but the Astros and Athletics should be putting really solid teams out there this year. With the season only lasting a couple of months, San Diego will have to string together victories wherever they can.

The Padres will need maximum statistical production from their lineup as well, and the good news is that there’s some significant talent here. Fernando Tatis, Tommy Pham and Manny Machado all have nice power and speed combos coming out of the first three spots in the order. Specifically, Tatis has a great shot at hitting 10 homers and stealing 10 bases this season. Eric Hosmer and Wil Myers are a nice fit for the Nos. 4 and 5 slots, and Jurickson Profar offers some nice upside further down in the order. The Padres should put up some pretty decent offensive numbers this season, relatively speaking.

As for the starting rotation, that’s where some of the potential question marks could lie for San Diego. Chris Paddack should be a nice No. 1 starter following his 3.33 ERA and 9-7 record over 140.2 innings last year. The duo of Garrett Richards and Zack Davies should be serviceable enough if they can keep their ERAs around 4.00, and Joey Lucchesi is always a slot-in option. We could see the Padres use 2020’s expanded rosters to get a look at hot prospects like MacKenzie Gore and Luis Patino as well. Should be interesting.

Pick: You know what? I’m going over. Looking at San Diego’s 2019 it’s a little crazy to think the team would make a jump to over-.500 ball this year, but anything is possible in this very strange 2020. The Padres have a pretty manageable division schedule outside of heavy hitters Los Angeles and (probably) Arizona. On paper, the AL West isn’t all that daunting either outside of Oakland and Houston.

San Diego has a nice mix of speed and power in their lineup, and if the pitching can stay on point I think the team has a shot at hitting 32 or 33 victories in 2020. That would be a HUGE step forward for the team, and I think the Padres will get there.

The pick in this article is the opinion of the writer, not a Sports Chat Place site consensus.
Previous Pick
LG Twins vs. Doosan Bears - 7/9/20 KBO Baseball Pick, Odds, and Prediction
Next Pick
Colorado Rockies Shortened MLB Season Pick, Odds and Prediction