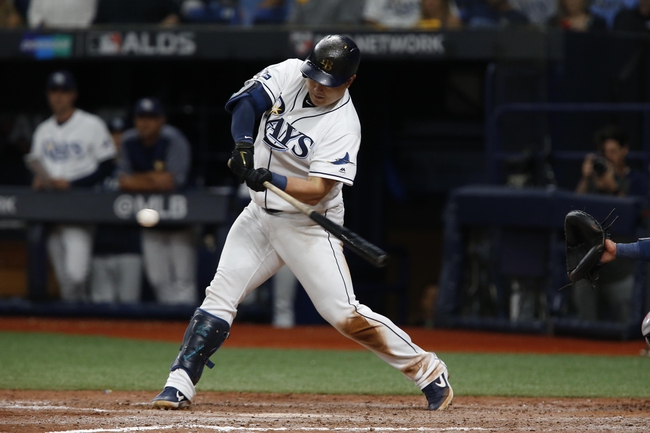 The Tampa Bay Rays will be a dangerous team in the American League East during the 2020 MLB season.

The Rays finished at 96-66 in 2019, good enough for a Wild Card playoffs bid. Tampa Bay took out Oakland in the AL Wild Card Game, but fell to the Astros in five games during the Division Series. This year, the Rays will be out to dethrone the New York Yankees in the AL East and do some damage in the playoffs. Check back all season long for free MLB picks and MLB predictions at Sports Chat Place.

Let's take a closer look at Tampa Bay's current status and break down the team's chances at hitting their projected win total this season.

Tampa Bay was a trendy pick for a 2019 playoff team, and they proved their supporters right with a 96-win season. The Rays were very competitive in most of their season series across the American League, a 2-5 record over the Twins and a 7-12 mark versus the Yankees being the only standout blemishes. Aside from that, Tampa took care of business in the division, posting a 12-7 record over the Orioles and Red Sox while going 13-6 versus the Blue Jays. New York was really the only thorn in the Rays’ proverbial side during the 2019 regular season.

On to 2020, and Tampa Bay is once again a hot pick for a nice campaign—relatively speaking. The Rays’ 40-game AL East schedule doesn’t look too daunting outside of the intimidating Yankees roster, and the other 20 games will be against a manageable NL East. The Braves and the Nationals could cause some issues, but realistically Tampa is a better team than the Mets, Phillies and Marlins. Those wins will come.

The Rays don’t really have much in the way of intimidating hitters in the lineup, but the machine the team has built works well. Brandon Lowe and Austin Meadows lead things off, and both those guys each have the potential for double-digit homers, 30 RBI and a handful of steals. Hunter Renfroe and Ji-Man Choi are another nice power duo further down the lineup, and Kevin Kiermaier boasts a nice bat for a potential eight or nine spot. There’s no jaw-dropping name recognition here, but it’s a really nice group of hitters that should work well together. And that’s what the Rays are aiming for.

Tampa Bay’s real strength is on the mound; we should see a few interesting combinations with openers and RPs over the course of the season. Charlie Morton is the ace after a 3.05 ERA, a 16-6 record and 240 Ks in 194.2 innings last year. The duo of Tyler Glasnow and Blake Snell are fully capable of turning in ERAs around 3.50 this season as well. Beyond that, guys like Yonny Chirinos, Ryan Yarbrough and Trevor Richards can slot in and pitch good innings whenever the Rays need. There will be a lot of options with an expanded pitching roster.

Pick: I like the over. The number seems about right on, but if everything goes well for Tampa Bay this year I could see the team flirting with 40 victories. Sure, there are some obvious drawbacks like playing the Yankees 10 times, but the Rays have more than enough creative pitching outlets to flummox most hitters. Tampa will be competitive once again, and I expect them to be fighting for the AL East lead with New York all season long.