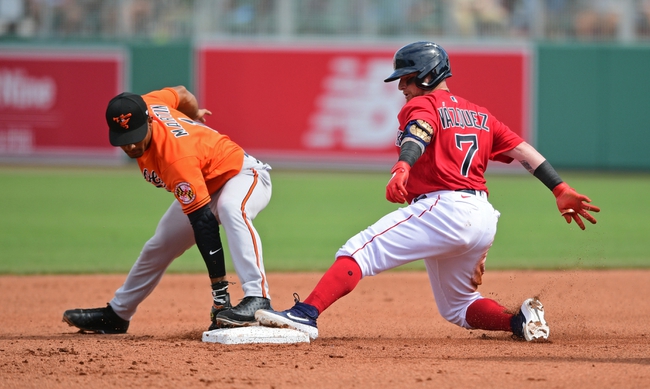 The Baltimore Orioles and the Boston Red Sox meet Friday in MLB action from Fenway Park.

Baltimore is coming out of a pretty ugly 2019, going 54-108 overall. That result left the Orioles in the basement of the AL East and out of the playoffs again. As for the Red Sox, they went 84-78 overall and out of the playoffs. It was the first time Boston failed to win the division since 2015. Check back all season long for free MLB picks and MLB predictions at Sports Chat Place.

Baltimore was able to get three summer exhibition games in this week. On Sunday, the Orioles opened up with a 4-1 win over the Phillies. Baltimore couldn’t keep it going in a home-and-home versus the Nationals, however. The Orioles lost 4-2 in Monday and 6-4 on Tuesday.

For the Friday 2020 season opener, the Orioles will go with Tommy Milone. Baltimore was originally going with John Means in this spot, but Means came down with arm fatigue and will be pushed back. Milone went 4-10 in 2019 with a 4.76 ERA and 94 strikeouts in 111.2 innings.

Over on the Red Sox’ side, they managed to fit in a pair of Fenway games against the Blue Jays in exhibition play this week. Boston lost the Tuesday opener 8-6, and in the planned Wednesday rematch, the Red Sox were rained out. The game was cancelled.

For Friday’s opener, the Red Sox will send out Nathan Eovaldi to the mound. This will be his first career Opening Day start. In his career versus the Orioles, Eovaldi is 3-1 with a 5.62 ERA in nine starts. He’s 5-2 with a 4.81 ERA in his career at Fenway Park.

Pick: Going Red Sox. Neither starting pitcher here really looks all that intimidating, but Boston probably has the edge in most facets. Baltimore is going to have trouble with consistent hitting across their lineup (again) this year, and I don’t see the team plating many runs overall. It won’t take much for Eovaldi to keep this O’s lineup under control. So long as the bullpen doesn’t implode the Sox should be fine here.

I don't expect Boston or Baltimore to finish in a Wild Card position (or even above third place in the AL East) this year, but who knows?