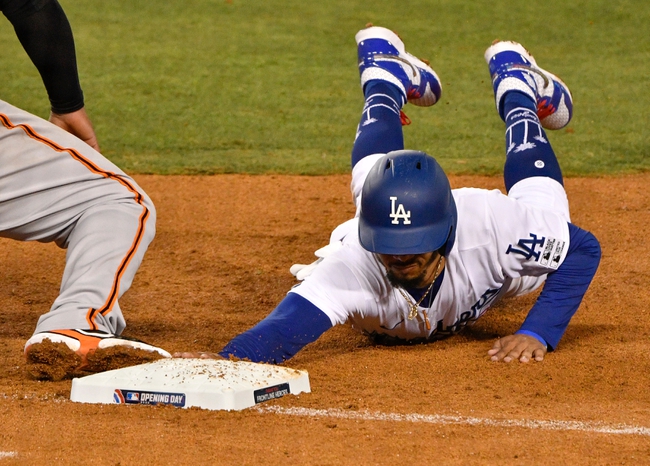 TV: SportsNet Los Angeles, NBC-Bay Area Stream the MLB Game of the Day all season on ESPN+. Sign up now!

The San Francisco Giants and the Los Angeles Dodgers meet in an NL West division matchup from Dodger Stadium on Friday night.

The San Francisco Giants will look to bounce back after starting the season with an 8-1 loss to the Dodgers on opening night. Pablo Sandoval accounted for San Fran’s lone RBI while Mike Yastrzemski, Alex Dickerson and Tyler Heineman each went 2 for 4 at the dish. Wilmer Flores added a base knock as well as none of San Francisco’s eight base hits went for extra bases in the losing effort. Johnny Cueto allowed one run on five hits while striking out three over four innings of work, not factoring in the decision. Tyler Rogers ended up with the loss in relief after allowing four runs on three hits in less than an inning to fall to 0-1 on the year. The Giants have yet to announce a starting pitcher but we will update that information once it’s released.

The Los Angeles Dodgers will look to build on their solid showing in the season opener over San Francisco. Kike Hernandez led the charge, going 4 for 5 with a home run and five RBIs while Max Muncy and Justin Turner each had a double and an RBI. Austin Barned added an RBI of his own to round out L.A.’s scoring while Corey Seager and Cody Bellinger each added a double as well. Joc Pederson, A.J. Pollock and Mookie Betts all chipped in base hits as well to cap off the Dodger offense in victory. Dustin May gave up one run on seven hits while striking out four over 4.1 innings of work, not factoring in the decision. Adam Kolarek picked up the win in relief to improve to 1-0 on the year. Ross Stripling is expected to start here and was 4-4 with a 3.47 ERA and 93 strikeouts last season. In his career, Stripling is 1-3 with a 3.55 ERA and 27 strikeouts against San Francisco.

I get the Dodgers being favored here, but this is an extremely steep price for a guy like Stripling, and I’m not about to pay that price for him. On the other side, the Giants could be worth a shot, but I need to see a starting pitcher before making a call like that. Instead, I’m going to side with the over. I think Stripling will get batted around a bit, at least for a couple of runs, and we already saw what the Dodgers’ lineup is capable of, and even if San Francisco has a solid start from the pitcher, the bullpen has shown already It’s prone to giving up runs. I’ll take the over in this spot.