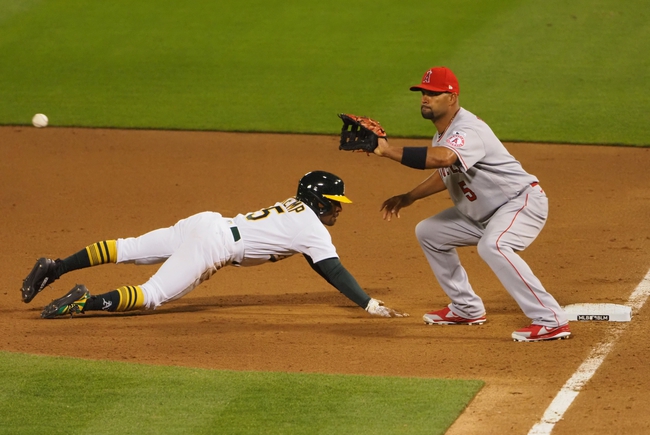 The Los Angeles Angels and the Oakland A’s meet in an AL West division matchup from the Oakland Coliseum on Saturday.

The Los Angeles Angels will look to rebound after a 7-3 loss in extra innings to Oakland in game one on Friday. Jason Castro belted a solo home run while Brian Goodwin and David Fletcher each had RBIs as well to finish off the Angels’ scoring as a team in the losing effort. Mike Trout, Shohei Ohtani, Tommy La Stella and Andrelton Simmons each had a base hit as well in the losing effort for the Halos. Andrew Heaney gave up one run on two hits while striking out six over 4.2 innings of work, not factoring in the decision. Handel Robles took the loss in relief to fall to 0-1 on the year. Dylan Bund will make his Angels’ debut here and was 7-14 with a 4.79 ERA and 162 strikeouts for Baltimore last season. In his career, Bundy is 2-1 with a 5.04 ERA and 36 strikeouts against Oakland.

The Oakland A’s will look to build on their extra innings win in the series opener. Matt Olson led the way with the walk-off grand slam, while Ramon Laureano went 2 for 3 with a solo home run, a double and two RBIs. Matt Chapman added a triple and an RBI to finish off Oakland’s scoring as a team in the win while Chad Pinder and Mark Canha each had a base hit to cap off Oakland’s offense as a team in the victory. Frankie Montas allowed one run on three hits while striking out five over four innings of work, not factoring in the decision. Burch Smith got the win in relief to improve to 1-0 this season. Sean Manaea is expected to get the start and went 4-0 with a 1.21 ERA and 30 strikeouts across 5 starts last season. In his career, Manaea is 2-3 with a 4.33 ERA and 30 strikeouts against the Angels.

I get why the plus money with the Angels is tempting, but let’s face it. The Angels blew it last night and the A’s took full advantage. Oakland is simply the better all-around team here, and while Manaea’s been up and down against the Angels., Bundy was mostly down last season on his own. I’ll lay the juice with Oakland here.