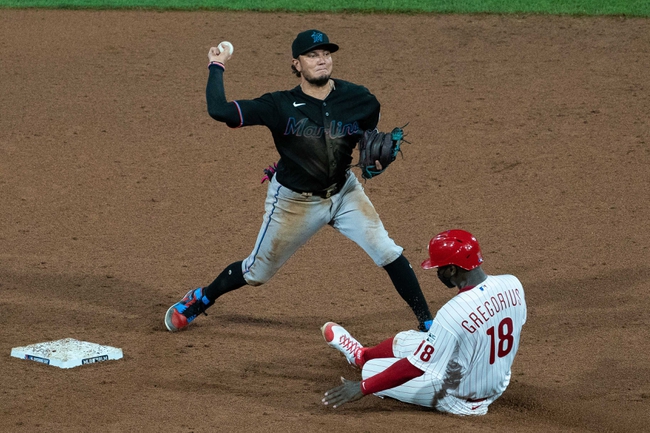 TV: NBCS-Philadelphia, FS-Florida Stream the MLB Game of the Day all season on ESPN+. Sign up now!

The Miami Marlins and the Philadelphia Phillies meet in an NL East division matchup from Citizens’ Bank Park on Saturday afternoon.

The Miami Marlins will look to build on a 5-2 win over the Phillies on Friday. Jesus Aguilar led the Fish with a two-run home run while Garrett Cooper had a double and an RBI and Jonathan Villar added an RBI of his own as well in the win. Corey Dickerson went 2 for 4 with a double and Miguel Rojas had two hits as well in the winning effort. Brian Anderson and Francisco Cervelli each had a base knock as well to cap off Miami’s offense as a team in victory. Sandy Alcantara gave up one run on three hits while striking out seven over 6.2 innings of work to get the win to improve to 1-0. Brandon Kintzler picked up the save by closing out the 9th. Caleb Smith will start game two and was 10-11 with a 4.52 ERA and 168 strikeouts last season.

The Philadelphia Phillies will try to bounce back after dropping their season opener on Friday. Didi Gregorius led the Phils by going 2 for 3 with a solo home run while Rhys Hoskins, Scott Kingery and Roman Quinn each had a base knock as Philadelphia mustered up just five hits as a team in the losing effort. Aaron Nola allowed four runs on five hits while striking out seven over 5.1 innings of work. Zack Wheeler makes his Phillies debut in game two and was 11-8 with a 3.96 ERA and 195 strikeouts as a member of the Mets last season. In his career, Wheeler is 7-3 with a 1.91 ERA and 105 strikeouts against Miami.

Wheeler being favored makes sense as he had a 1.96 ERA in three starts against Miami last season and has a sub-2.00 ERA in his career against the Fish. However, Smith was arguably Miami’s best pitcher overall last season even though the numbers wouldn’t necessarily say so, and the Marlins just took it to Philadelphia’s best pitcher in Nola in the opener. It’s still early, but there’s value to be had with Miami after what we saw on Friday. Give me the Marlins and the plus money.