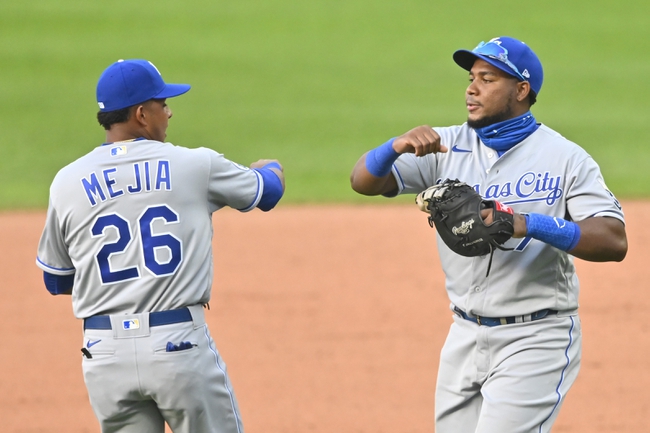 TV: FSKC, FSOH Stream the MLB Game of the Day all season on ESPN+. Sign up now!

The Kansas City Royals and the Cleveland Indians meet Sunday in MLB action from Progressive Field.

This game will be the finale of the opening weekend series between these teams. Cleveland took the first game Friday 2-0. In the Saturday game two matchup, we had a 10-inning battle as the Royals ultimately prevailed 3-2. Check back all season long for free MLB picks and MLB predictions at Sports Chat Place.

Kansas City out-hit the Indians 5-4 on Saturday, and had a pair of solo homers from Jorge Soler and Salvador Perez keeping the team in the game. Closer Greg Holland had a three-strikeout inning to earn the save, and Scott Barlow earned the win despite one hit and two walks in his inning.

For the Sunday start, Kansas City will send out RHP Ronald Bolanos. This will be Bolanos’ first start for the Royals, as he was acquired in a deal from the Padres. Last season in five outings (three starts), Bolanos went 0-2 with a 5.95 ERA.

Over on the Cleveland side, there wasn’t much going on offensively Saturday. No Indians player had more than one hit. Jose Ramirez had the lone RBI, and Bradley Zimmer scored the run. Cleveland left a whopping 20 men on base in the game as well.

In the Sunday start, the Indians will send out RHP Carlos Carrasco. This will be Carrasco’s first start since last May, as he was diagnosed with leukemia in June and out for three months. Carrasco was able to return as a reliever however, and compiled a 6-7 record with a 5.29 ERA and 96 strikeouts in 80.0 innings total.

Pick: I’m leaning toward the Royals. Kansas City is probably not going to do much this season, but the team does have some bright spots. Cleveland is the better team on paper, but with a pretty tepid offensive performance so far I’m not sold on the Indians right now. Granted, this is a value pick due to some pretty thick odds, but it might be worth taking the Royals in a lower-scoring game. It also will be interesting to see what Bolanos can do here. If he can generate a handful of quality innings, Kansas City will be in good position to steal one here.