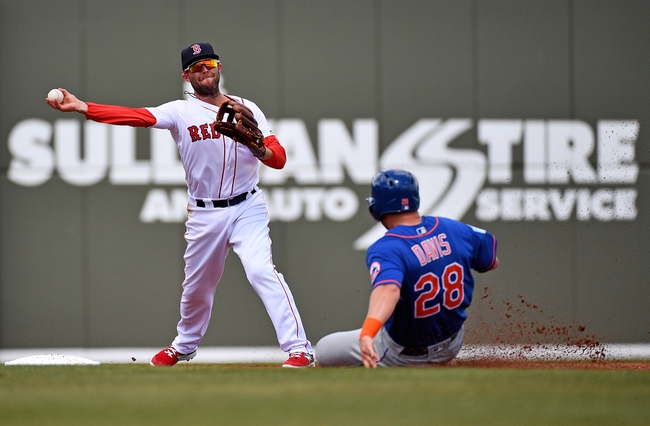 TV: NESN, SNY, ESPN Stream the MLB Game of the Day all season on ESPN+. Sign up now!

The New York Mets need a bounce back showing after losing two of three to the Atlanta Braves. The Mets just allowed 14 runs in their Sunday night loss and are allowing 6.3 runs per game through three contests. The Mets have allowed five or more runs in three of their last four games. Michael Conforto leads the Mets with four hits while Brandon Nimmo and Amed Rosario have combined for six hits and two RBI. Michael Wacha gets the ball for the Mets, and he was 6-7 with a 4.76 ERA and 104 strikeouts last season. This will be Wacha’s first career game against the Red Sox.

The Boston Red Sox look for a bounce back performance after losing two of three to the Baltimore Orioles. The Red Sox pitching staff has allowed 14 runs in their last two games and is allowing 5.3 runs per game on the season. It’s not a great start for the Red Sox to put it nicely. Jackie Bradley Jr. leads the Red Sox with seven hits and two RBI while J.D. Martinez and Jose Peraza have combined for nine hits and five RBI. Josh Osich gets the ball for the Red Sox, and he is 0-0 with a 0.00 ERA and one strikeout this season. Osich is 0-1 with a 6.48 ERA and eight strikeouts in his career against the Mets.

This should be an interesting matchup between two teams that need a victory after disappointing opening series. You can argue the Mets are the better team here with the more reliable starting pitcher, but they're also the team that has to travel after playing a Sunday night game. The Mets pitching has also gotten rocked the last two games and last nights performance doesn't give a fuzzy feeling. The Boston Red Sox may not be contenders this season, but they're much better than what they showed against the O's and not having to travel this early in the season is an advantage.

I'll side with the Red Sox to draw first blood.