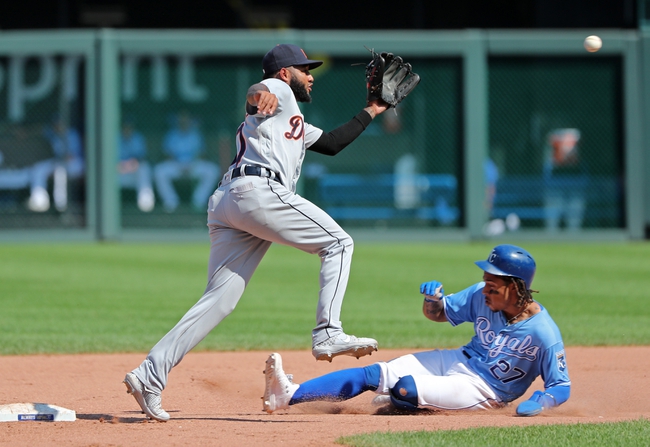 TV: FSDT, FS-D, FSKC Stream the MLB Game of the Day all season on ESPN+. Sign up now!

The Kansas City Royals and the Detroit Tigers meet Monday in MLB action from Comerica Park.

Kansas City is coming off a three-game weekend set versus the Indians. The Royals lost Friday 2-0 but won Saturday 3-2. In the Sunday game, Kansas City fell again 9-2. As for the Tigers, they played the Reds this weekend. Detroit also split their first pair, losing Friday 7-1 and winning Saturday 6-4. On Sunday the Tigers eked out a 3-2 victory. Check back all season long for free MLB picks and MLB predictions at Sports Chat Place.

The Royals were down big early in the Sunday finale, trailing the Indians 7-1 heading into the fifth inning. Ronald Bolanos opened up the game and went 2.0 innings with three hits, one walk and two runs (zero earned). Jorge Lopez and Gabe Speier each pitched 0.2 innings after that, allowing a combined six hits and four earned runs. That was where the game got out of hand for Kansas City.

For Monday’s opener, the Royals will send out LHP Mike Montgomery. Last season Montgomery went 2-7 with a 4.64 ERA and 51 strikeouts in 64.0 innings overall. Back on August 10, Montgomery tossed seven scoreless innings against the Tigers and struck out 12 batters.

Over on the Detroit side, they scored two in the ninth inning Sunday to sneak past the Reds, who are actually a pretty good team this season. The pair of runs came courtesy of a CJ Cron homer, and Niko Goodrum snagged a solo homer as well. Joe Jimenez coughed up an earned run but still bagged the save, his second of the season.

For Monday’s series opener, the Tigers will send Michael Fulmer to the mound in the start. He’ll likely be on a strict innings limitation here, as Fulmer is coming off Tommy John surgery that kept him out all last season. In 2018, Fulmer went 3-12 with a 4.69 ERA and 110 strikeouts in 132.1 innings.

Pick: I have to lean Royals here, but it’s close. We’re probably going to have a higher-scoring game featuring lots of relief pitchers, but Montgomery should be able to stay in there for a while if he’s on. The Kansas City offense is what concerns me; Whit Merrifield (.300 BA) and Salvador Perez (.273 BA) have been the only relatively consistent contributors in this small sample size. Still, I think the Royals will have enough firepower to deal with Fulmer.