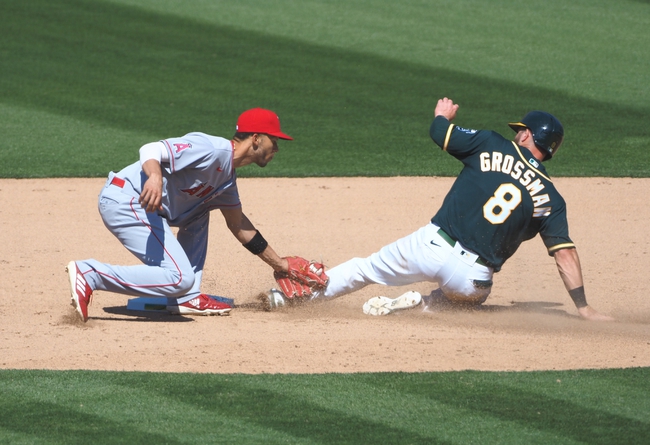 The Los Angeles Angels and the Oakland A’s meet in an AL West division matchup from the Oakland Coliseum on Monday afternoon.

The Los Angeles Angels will try to salvage a series split after dropping game three on Sunday by a final score of 6-4. Mike Trout accounted for all four Angel runs, going 2 for 3 with a three run home run. David Fletcher went 4 for 4 at the dish while Brian Goodwin had a pair of hits and Michael Hermosillo added a base knock to round out the Angels’ offense in the losing effort. Shohei Ohtani allowed five runs on three hits while failing to record an out, taking the loss to fall to 0-1 on the year. Griffin Canning will start the finale and was 5-6 with a 4.58 ERA and 96 strikeouts last season. In his career, Canning is 1-1 with a 3.50 ERA and 19 strikeouts against Oakland.

The Oakland A’s will try to win the series after taking game three on Sunday. Mark Canha had two RBIS while Sean Murphy had a solo home run and Matt Olson and Robbie Grossman each had an RBI as well. Marcus Semien went 2 for 4 at the plate and Ramon Laureano chipped in a base knock as well in the victory. Mike Fiers allowed four runs on seven hits over four innings of work, not factoring in the decision. Yusmeiro Petit got the win to improve to 1-0 while Liam Hendriks closed out the 9th for his first save of the season. Chris Bassitt will start game four and was 10-5 with a 3.81 ERA and 141 strikeouts last season. In his career, Bassitt is 2-2 with a 6.33 ERA and 22 strikeouts against the Angels.

I can understand the A’s being favored here at home, and boy did they look good in taking it to Ohtani on Sunday.  However, the A’s only scored once over the last 7 innings, and as up and down as the Angels have been in the first three games, they still have guys like Mike Trout that can make you pay for a mistake. Canning is coming off of a decent rookie season and he held the A’s to one run in six innings of work in his lone start at Oakland Coliseum. I’ll take a shot with the Angels and the plus money for the series split here.