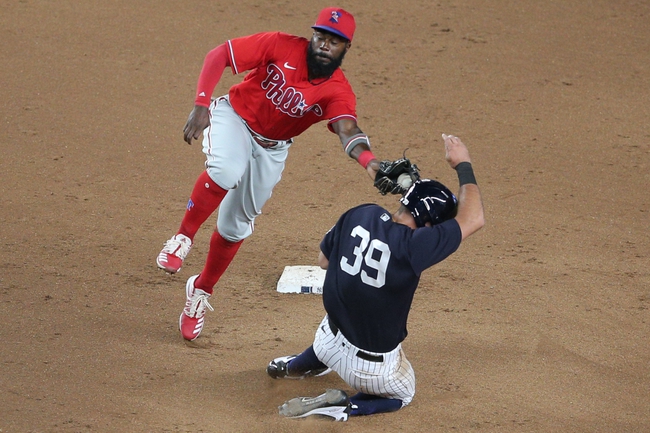 TV: YES, NSPA, NBCSP Stream the MLB Game of the Day all season on ESPN+. Sign up now!

UPDATE: This game has been postponed due to a COVID-19 outbreak.

New York is coming out of a weekend set against the Nationals. The Yankees managed a win Friday 4-1 but fell Saturday 9-2. In the Sunday rubber match New York eked out a 3-2 win. Over on the Phillies’ side, they just finished against the Marlins. Philadelphia also split their first pair 5-2 (loss) and 7-1 (win), and on Sunday the Phillies dropped another one 11-6. Check back all season long for free MLB picks and MLB predictions at Sports Chat Place.

The Yankees were in trouble for 2/3 of Sunday’s game. The Nationals’ Patrick Corbin allowed just one hit through 6.0 innings, and Washington had a 2-0 lead. New York finally broke through on a couple of solo home runs from Gleyber Torres and Luke Voit, and another Torres RBI in a 3-for-4 game for him would be the difference. DJ LeMahieu was the only other Yankee to have a hit.

For Monday’s game, New York will bring out JA Japp in the starting role. Last season, Happ posted a 12-8 record with a 4.91 ERA and 140 Ks in 161.1 innings of work. He also gave up a career-high 34 home runs last season, so there could be some opportunities for the Phillies power hitters here.

Speaking of the Phillies, their opening series wasn’t very reassuring. Philadelphia tok a 4-0 lead into the second inning and immediately saw it evaporate, and they were down five runs in the sixth inning. Philly couldn’t do much of anything with the opportunities they were given, leaving 29 men stranded on base throughout the course of the game.

In the Monday matchup, Philadelphia will send Jake Arrieta to the mound in the start. Arrieta went 8-8 in 2019 with a 4.64 ERA and 110 strikeouts in 135.2 innings. After pitching with bone spurs in his elbow for the first half of the year, Arrieta was sidelined to recuperate and had an abbreviated season.

Pick: I’m going to stick with the Yankees. Sure, New York’s offense has been pretty lackluster compared to what’s on paper, but the team managed to find their opportunities over the weekend seres. The Yankees hitters will probably take a week or two to find their proverbial groove, and New York has enough talent across the roster to keep the team afloat until then.