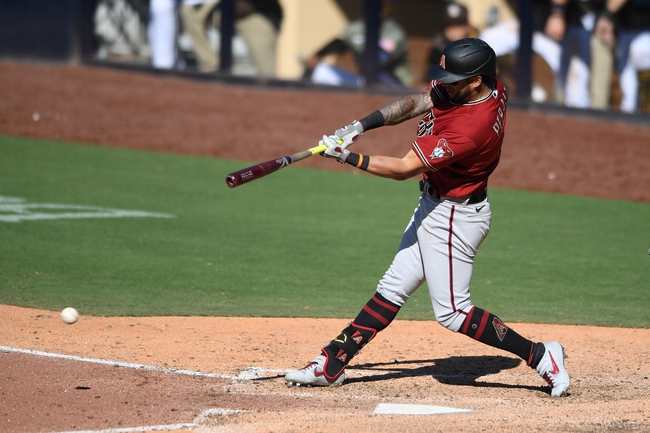 TV: ESPN, FS-San Diego, FS-Arizona Stream the MLB Game of the Day all season on ESPN+. Sign up now!

The Arizona Diamondbacks and the San Diego Padres meet in an NL West division matchup from Petco Park on Monday afternoon.

The Arizona Diamondbacks will look to build on their first win of the season in a 4-3 win over San Diego last time out. Ketel Marte went 2 for 3 with a double and an RBI while David Peralta had two hits and an RBI and Staling Marte added an RBI as well. Eduardo Escobar and Ildemaro Vargas each chipped in a base hit to finish off Arizona’s offense as a team in the winning effort. Zac Gallen allowed one run on two hits while striking out six over four innings of work, not factoring in the decision. Archie Bradley picked up the win in relief to improve to 1-0 on the year. Luke Weaver will start game four and was 4-3 with a 2.94 ERA and 69 strikeouts last season. In his career, Weaver is 2-3 with a 2.27 ERA and 34 strikeouts against San Diego.

The San Diego Padres will look to rebound from their first loss of the year after Sunday’s loss. Eric Hosmer had a solo home run while Jake Cronenworth and Greg Garcia each had an RBI as well to round out San Diego’s scoring as a team in the losing effort. Fernando Tatis Jr, Trent Grisham and Jurickson Profar each had a base hit to round out San Diego’s offense as the Padres had just six hits as a team in the losing effort. Garrett Richards threw five shutout innings, allowing just one hit while striking out six, not factoring in the decision. Kirby Yates took the loss, falling to 0-1 on the year. Joey Lucchesi will start game four and was 10-10 with a 4.18 ERA and 158 strikeouts last season. in his career, Lucchesi is 1-5 with a 5.19 ERA and 38 strikeouts against Arizona.

San Diego got off to a strong start in the first couple of games, and the bullpen looked solid. Now while you can't make a complete judgment over one bad outing, we saw the D-Backs crack that bullpen, and get to a closer in Kirby Yates, a pitcher that was nearly untouchable last season with an ERA just over one. Lucchesi's also had issues against Arizona, while Weaver is going to be a cornerstone of Arizona's rotation in the new few years and is one of the bright spots for that team's future. I'll take a shot with Arizona and the plus money here.