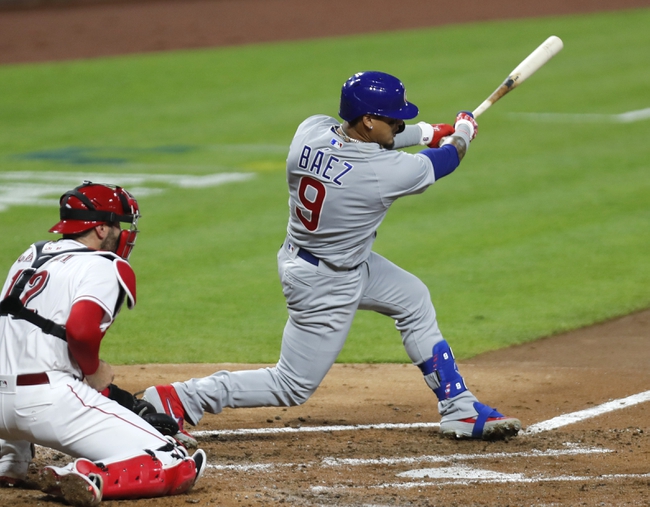 TV: FS-O, MARQ, FSOH Stream the MLB Game of the Day all season on ESPN+. Sign up now!

This is game two of a four-game set between these National League Central Division teams. In the opener on Monday, the Cubs eked out an 8-7 victory. Check back all season long for free MLB picks and MLB predictions at Sports Chat Place.

Chicago won by the skin of their proverbial teeth Monday, as they carried a 7-0 lead heading into the bottom of the sixth. The Cubs were outscored 7-1 after that. Wilson Contreras and David Bote combined for four hits, two runs and three RBI to lead the offense.

For the Tuesday matchup, the Cubs will send out RHP Alec Mills in the start. Chicago is relying on Mills to help fill out the rotation due to Jose Quintana’s thumb injury. In nine games last year, Mills posted a 1-1 record with a 3.77 ERA and 69 Ks in 57.1 innings pitched.

Over on the Reds’ side, a bad outing from starting pitcher Wade Miley didn’t help matters Monday. Miley went 1.2 innings, giving up four hits, five earned and two walks. The bullpen only gave up two runs the rest of the way, however. On the offensive side, Tyler Stephenson went 2-for-2 with a homer, two RBI and two runs.

In the Tuesday game, Cincinnati will go with Tyler Mahle as the starter. Mahle is stepping in for Anthony DeSclafani, who will miss one of his scheduled outings due to an arm issue. In 2019, Mahle posted a 3-12 record with a 5.14 ERA and 129 strikeouts in 129.2 innings.

Pick: I like the Reds. Still. Despite how mediocre they’ve been so far. With two back-end starting pitchers on the slate, this one could feature lots of offense. That said, Mahle should be able to go a handful of innings; he’s a pretty versatile pitcher. Mahle’s velocity is also looking good; he was recently clocked in the 97 MPH range. I like Cincinnati to put together a nice game here and make some progress in the division. The offense started showing signs of life in the later innings Monday, which might translate to game two.