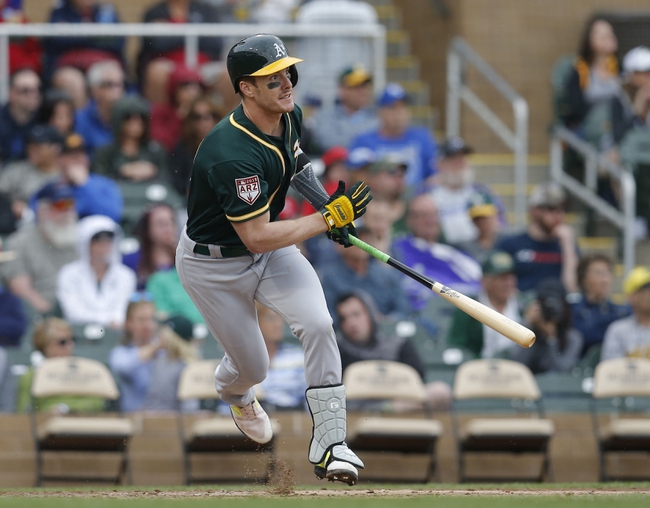 TV: ATT-Rocky Mountain, NBCS-California Stream the MLB Game of the Day all season on ESPN+. Sign up now!

The Colorado Rockies and the Oakland A’s meet in MLB action from the Oakland Coliseum on Tuesday night.

The Colorado Rockies will look to build on their series victory over the Texas Rangers following a 5-2 win over Texas in Sunday’s series finale. Trevor Story led the Rockies by going 2 for 2 with a pair of home runs and three RBIs with two walks. Tony Wolters and Ryan McMahon each had an RBI to round out Colorado’s scoring in the win while Daniel Murphy went 2 for 4 with a double. Charlie Blackmon and Nolan Arenado each added a base hit as well as the Rockies had seven hits as a team in the win. Kyle Freeland got the win to improve to 1-0 after allowing two runs on four hits with five strikeouts over six innings of work. Wade Davis closed out the 9th for his second save of the year. Antonio Senzatela will start game one and was 11-11 with a 6.71 ERA and 76 strikeouts last season. This will be Senzatela’s second career start against Oakland.

The Oakland A’s will look to build on their series win over the Angels in Monday’s finale. Matt Chapman led the way by going 3 for 4 with a double and an RBI while Mark Canha went 2 for 4 with a solo home run. Ramon Laureano added a base hit to finish off Oakland’s scoring as a team in the win while Marcus Semien added a base hit to cap off Oakland’s offense as the A’s had just six hits as a team in the winning effort. Chris Bassitt threw four shutout innings with five hits and five strikeouts in the start, not factoring in the decision. Burch Smith got the win to improve to 1-0 while Joakim Soria got the save for his first of the season. Daniel Mengden will start the opener and was 5-2 with a 4.83 ERA and 42 strikeouts last season. This will be Mengden’s first career start against Colorado.

The Rockies looked good against the Rangers, but I’m not sure how the pitching will fare against an Oakland team that can really swing the bat and Senzatela didn’t really miss many bats last year, with just 76 strikeouts in 25 starts. On the other hand, I’m not sure what to expect from Mengden who has only pitched a total of four innings over the last calendar year and gave up four runs in back-to-back starts when he was starting for Oakland last year. Instead, I’m going to side with the over as you have a washy pitching matchup and two offenses that can put runs on the board in a hurry.