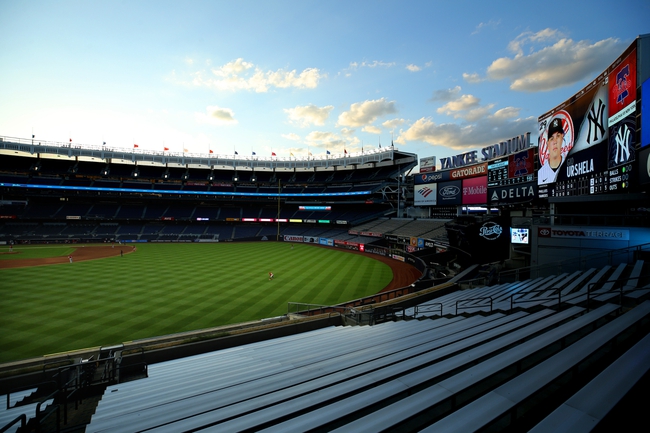 TV: FS-1, YES, NBCS-Philadelphia Stream the MLB Game of the Day all season on ESPN+. Sign up now!

The New York Yankees and the Philadelphia Phillies meet in MLB action from Citizens Bank Park on Tuesday night.

The New York Yankees will look to carry some momentum over after Monday’s opener was postponed. The Yankees picked up a series win over Washington after a 3-2 win in the series finale on Sunday. All of the Yankees’ damage on the scoreboard came via the long ball, as Gleyber Torres went 3 for 4 with a two-run home run while Luke Voit belted a solo home run. DJ LeMahieu added a base hit as well to round out New York’s offense as the Yankees had just five hits as a team in the losing effort. Jonathan Loaisiga gave up one run on two hits while striking out three over three innings of work, not factoring in the decision. Chad Green got the win to improve to 1-0 while Zach Britton picked up his first save of the year. Gerrit Cole is expected to start this one and is 1-0 with a 1.80 ERA and 5 strikeouts this season. In his career, Cole is 4-3 with a 3.38 ERA and 41 strikeouts against Philadelphia.

The Philadelphia Phillies will try to rebound from their series loss to Miami over opening weekend following an 11-6 loss to Miami last time out. Bryce Harper led the way with a three-run home run while Adam Haseley went 4 for 6 with a pair of doubles and an RBI and Jay Bruce went 2 for 3 with a triple, a double and an RBI as well. Rhys Hoskins had a double while J.T. Realmuto, Didi Gregorius, Jean Segura and Phil Gosselin each had a base hit to finish off Philadelphia’s offense as a team in defeat. Vince Velasquez allowed four runs on three hits while striking out four over three innings of work, not factoring in the decision. Cole Irvin took the loss, falling to 0-1 after allowing four runs on five hits over just a single inning of relief. Zach Eflin will start this one and was 10-13 with a 4.13 ERA and 129 strikeouts last season. This will be Eflin’s second career start against the Yankees.