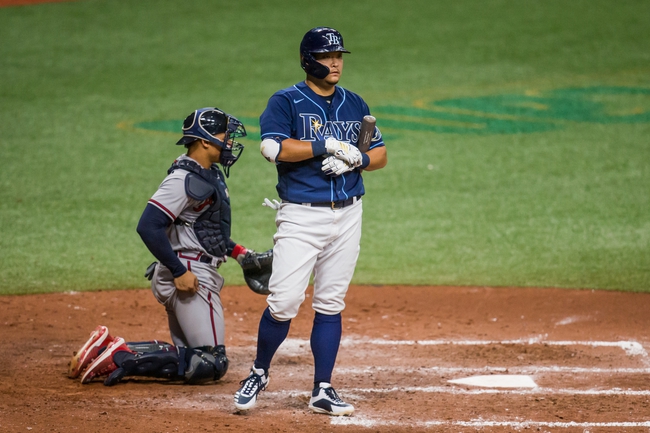 TV: SUN, FSSE Stream the MLB Game of the Day all season on ESPN+. Sign up now!

The Atlanta Braves look to get a game above a .500 record with a victory here. The Braves allowed 14 runs after scoring 14 runs in their previous game. The good news is the Braves have scored five or more runs in three straight games. Dansby Swanson leads the Braves with six hits and seven RBI while William Contreras and Marcell Ozuna have combined for eight hits and four RBI. Kyle Wright gets the ball, and he was 0-3 with a 8.69 ERA and 18 strikeouts last season. This will be Wright’s first career game against the Rays.

The Tampa Bay Rays look for anther victory to build on their three-game winning streak. The Rays offense is now averaging seven runs per game through four games. With the Rays pitching, they’re going to win oodles of games if that average continues. Brandon Lowe leads the Rays with seven hits and five RBI while Willy Adames and Jose Martinez have combined for seven hits and five RBI. Yonny Chirinos gets the ball, and he was 9-5 with a 3.85 ERA and 114 strikeouts last season. This will be Chirinos’ second career game against the Braves.

We don't have enough on Wright to get behind him with any confidence, as he's pitched just 25 career innings and has an ERA over seven. No, thanks. Chirinos has been decent through two seasons and was solid at home last year with a 3.10 ERA and .207 allowed batting average. The Tampa Bay Rays are also flexing their muscle offensively, which is downright scary for the rest of the league. If the Rays can consistently score runs with their pitching, they're a serious World Series threat.

Give me the Rays.