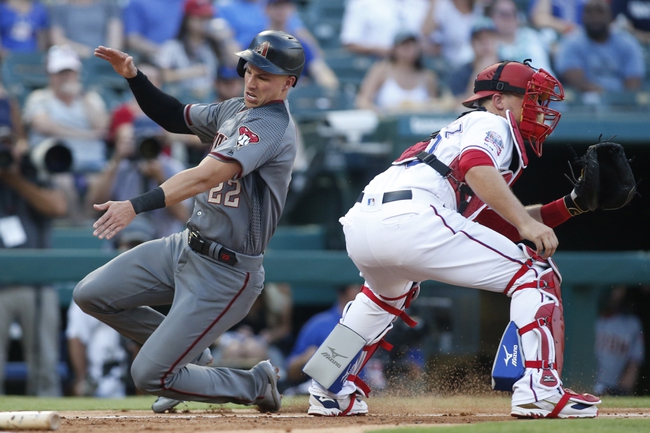 TV: FSAZ, FSSW Stream the MLB Game of the Day all season on ESPN+. Sign up now!

The Arizona Diamondbacks and the Texas Rangers meet Tuesday in MLB action from Globe Life Field.

The Diamondbacks are coming out of a four-game set versus the Padres. Arizona dropped the first two games of that series but won Sunday 4-3. In the Monday finale, the Diamondbacks fell again 6-2. As for the Rangers, they played the Rockies over the weekend. Texas won the first game Friday but dropped the series with Saturday and Sunday losses. Check back all season long for free MLB picks and MLB predictions at Sports Chat Place.

Arizona really only had one good inning in their Monday loss to San Diego. The Diamondbacks plated two runs in the third, courtesy of Eduardo Escobar and Starling Marte. Luke Weaver was beaten up in the start, going 3.1 innings with seven hits, two walks and six earned runs.

For the Tuesday start, the Diamondbacks will send out Merrill Kelly in the start. Last year, Kelly posted a 13-14 record with a 4.42 ERA and 158 strikeouts in 183.1 innings. With Mike Leake electing not to play this season, the fifth spot in the Arizona rotation belongs to Kelly after a solid summer camp performance.

Over on the Rangers’ side, they could only generate five runs in three games during the series opener. Sunday’s 5-2 loss was another tepid offensive effort; Nick Solak was the only Texas player with more than one hit (2-for-4). A few Rangers have gotten off to decent starts—Joey Gallo is hitting .273 with a homer and two RBI—but most haven’t. Roughned Odor (.182 BA) and Todd Frazier (.125 BA) have stumbled out of the gate.

For Tuesday’s game, Texas will go with Kyle Gibson in the start. The Rangers signed Gibson as a free agent over the winter. Last season, Gibson went 13-7 with a 4.84 ERA and an even 160 strikeouts in 160.0 innings.

Pick: I like Arizona in a coin-flip game. Granted, there’s probably not going to be a whole lot of offense to go around here on either side. Early on it may be difficult for the Diamondbacks to get past Gibson, but ultimately I can see Arizona cobbling together a couple of runs in the late innings. Overall, this is going to be a key series for both clubs to get on track.